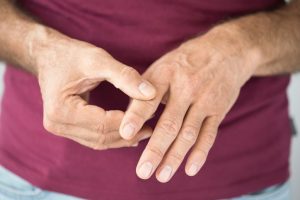 Erosive osteoarthritis is an inflammatory disease that impacts the joints in the fingers that allow the hand to flex towards the palm of the hand. These joints are known as interphalangeal joints. Since erosive osteoarthritis is a progressive condition that can limit movement in the hands, the sooner it’s diagnosed and the sooner it’s treated, the more likely some level of mobility can be maintained.

People who suffer from erosive osteoarthritis (EOA) often suffer from either Heberden or Bouchard nodes. Heberden nodes are bony enlargements at the middle joints of the fingers, while Bouchard’s nodes are swellings that develop closer to the fingertips.

What Are the Symptoms of Erosive Osteoarthritis?

Erosive inflammatory osteoarthritis symptoms tend to begin suddenly. Many people report severe tenderness in the finger joints, along with stiffness, swelling, redness, and warmth. This is different than the gradual onset of symptoms that are usually seen in those who are suffering from typical osteoarthritis. X-rays of those who have EOA can show breaks in the bone surface in the center of a joint. An X-ray can also detect bony growths, cysts in the bone under cartilage, partial dislocations, and ankyloses, which is stiffness of a joint from bone fusion.

Although more women seem to be affected by the symptoms of erosive osteoarthritis, there is some debate over whether EOA is really its own disease or a progression of hand osteoarthritis.

How Is Erosive Osteoarthritis Diagnosed?

An erosive osteoarthritis diagnosis only happens after the doctor takes your full medical history, does a physical exam, and conducts laboratory tests. Sometimes, imaging is also involved. There is a brief outline of the diagnostic steps below:

Ultrasound might help detect erosions early and provide valuable information on the presence of synovitis and inflammatory changes in other soft tissues.

Research shows that erosions tend to have a “gull wing” or “sawtooth” deformity. Although a lot can be determined through an X-ray, clinical and laboratory findings are very important in diagnosing erosive osteoarthritis and ruling out RA as well as other conditions such as gout, chronic renal diseases, and endocrine diseases.

People who suffer from rheumatoid arthritis can have wavy, gnarled-looking hands, but this is usually not the case with EOA. Unlike some forms of arthritis, EOA does not spread to large joints and doesn’t include fever, weight loss, or anemia. EOA should not be confused with psoriatic arthritis; an arthritic condition linked to psoriasis, which is a skin disease characterized by red, itchy, scaly patches.

Some medical research has indicated that an increased thickness of subclinical atherosclerosis has been found in some people who suffer from erosive osteoarthritis. Atherosclerosis basically means plaque build up in the arteries. The research shows atherosclerosis that could not be linked to usual cardiovascular risk factors.

Furthermore, there have been patients with EOA that have shown something referred to as endothelial dysfunction. The endothelium is a thin membrane lining the inside of the heart and blood vessels. Endothelial cells release a substance that controls vascular contractions and enzymes that play a role in preventing blood clotting, as well as helping with immune function.

Research continues into new potential therapies. For example, a tumor necrosis factor inhibitor may be one way to treat erosive osteoarthritis, but more evidence needs to be obtained. The important point to keep in mind is that EOA can lead to hand deformity and limited hand function, so early treatment is best.

While there is no magic cure for inflammatory erosive osteoarthritis, you can take steps that will help manage it.

There is no quick fix or quick diagnosis when it comes to inflammatory-erosive arthritis. If you are experiencing symptoms of pain, redness, swelling, and/or warmth in your finger joints, you should get a medical examination as soon as possible. Your doctor will rule out certain conditions and based on the conclusion of tests, you will receive advice on the best treatment options.