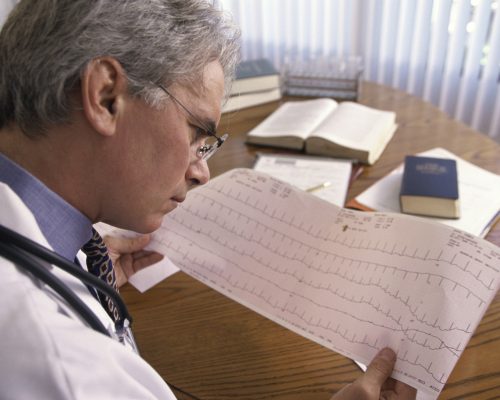 Epilepsy-related seizures can be predicted by measuring heart rate variability. The findings come from researchers in Japan who found that epileptic seizures may be better predicted using electrocardiogram to measure fluctuations in the heart rate than by measuring brain activity. This is also effective because wearing a heart monitor is much easier.

Epilepsy is a chronic disease that affects roughly one percent of the population. The disease is characterized by recurrent seizures, which are a result of excessive excitation that suddenly occurs in nerve cells (neurons) in the brain.

Anti-epileptic drugs allow majority of patients to live a normal life, but some patients are drug-resistant, meaning their seizures cannot be controlled by medications, leaving the patients living in constant fear of an impending seizure. Being able to predict seizures can offer these patients greater peace of mind.

Previous studies to predict seizures through heart rate were unsuccessful, and practical application was challenging as well. Dr. Toshitaka Yamakawa explained, “We analyzed heart rate fluctuations in the electrocardiographic data of 14 patients who had been hospitalized for long-term EEG video monitoring using a novel technique.”

The researchers used a Multivariate Statistical Process Control (MSPC) to analyze the heart rate variability. The results produced accurate predictions of seizures 91 percent of the time. Furthermore, predictions were made up to eight minutes prior to seizure onset. The difference between normal and preictal (before seizure) heart rates was very clear, and there were just a few false positives. The results show that it is possible to accurately predict seizures using heart rate.

Dr. Yamakawa continued, “The next step is to develop a wearable seizure prediction device. With that kind of device, patients would be able to ensure their safety before a seizure occurs and since the envisioned device would be attached to the chest, where it’s invisible externally, they would be able to have normal daily lives while wearing it. They wouldn’t need to be afraid of sustaining injury due to an unexpected seizure.”

An alternative study found that a brain implant may help to better predict seizures. In a small pilot study, 15 patients were tested. The patients were implanted with electrodes between the skull and the brain, connected with other electrodes in the chest. The data from the implants was then transmitted to a handheld device that patients could reference. High risk of a seizure is indicated by a red light, medium risk is a white light, and low risk is blue.

The devices successfully predicted seizures with a “high warning” sensitivity of over 65 percent. Some patients did experience negative side effects, including chest pains as a result of the chest implant moving. Two of the 15 patients did have the device removed.

Lead researcher Dr. Mark Cook said, “Knowing when a seizure might happen could dramatically improve the quality of life of people with epilepsy by giving them back some independence in their lives. A lot of patients with epilepsy will tell you it’s not the seizures themselves, but the fact they don’t know when they will happen, that is the worst part of their condition.”

Dr. Ashesh Mehta, director of epilepsy surgery at the North Shore-LIJ Comprehensive Epilepsy Care Center, added, “This study is an important first step. The next step would be to implant these in a larger sample of patients. And you need to see which groups of patients might be good candidates for this.”

Epilepsy patients who sleep on stomach face sudden death risk similar to SIDS (sudden infant death risk), according to research. Study author Dr. James Tao said, “Sudden unexpected death is the main cause of death in uncontrolled epilepsy and usually occurs unwitnessed during sleep.” Among epileptics, the risk of death while asleep is highest among patients with tonic clonic seizures. Continue reading…