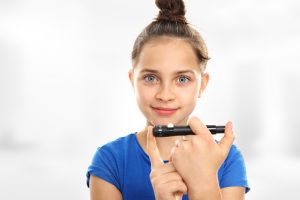 The highest risk group among type 1 diabetics were children with low blood sugar – hypoglycemia – as their risk of epilepsy was 16.5 times higher.

Dr. Scott Stevens, attending neurologist at Northwell Health’s Comprehensive Epilepsy Care Center in Great Neck, said, “Even though the risk of epilepsy is increased, most type 1 diabetics wouldn’t have it.”
Type 1 diabetes is an autoimmune disorder in which the body’s own insulin-producing cells are destroyed. Thus, a patient with type 1 diabetes requires insulin, either through injections or a pump. Determining the proper dosage of insulin can be challenging, as too little insulin results in high blood sugar, which over time can damage the blood vessels, causing diabetes-related complications.

Although the researchers found a link between type 1 diabetes and epilepsy, they did not establish a cause-and-effect relationship, nor is the link between the two conditions fully understood. The researchers suspect numerous factors that could come into play, including immune abnormalities, brain lesions, genetic factors, and metabolic abnormalities.

The researchers do stress that they don’t see the need for all children to be screened for epilepsy if they have type 1 diabetes, as that can result in unnecessary testing. On the other hand, they do stress the importance of managing blood sugar levels in children and adults alike to lower the risk of seizures and epilepsy.