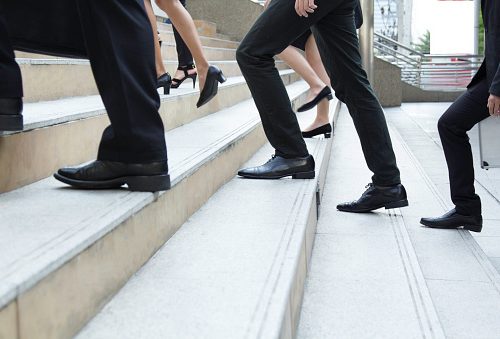 Taking the stairs is often seen as a chore, as it requires expending energy that could be saved by taking the elevator. While it may seem like a more heath conscious alternative, taking the stairs can be too difficult for seniors or the disabled, making their avoidance of stairs easier to justify
However, researchers from Georgia Institute of Technology and Emory University in Atlanta have reinvented stairs as we know them. Instead of taking exorbitant amounts of energy to take, these stairs give you your energy back, potentially cutting the force on the ankle by as much as 26 percent.

Give your energy back

The team of scientists involved recognizes that ascending and descending stairs uses up a lot of energy. So, instead of letting that energy go to waste, they have harnessed it into the stairs themselves.

The high-tech stairs absorb a person’s energy as he or she descends them, helping to also relieve stress on the ankles. But when a person ascends the same set of stairs, that same stored energy is released through a spring mechanism built into the stairs themselves. This makes ascending stairs approximately 37 percent easier on the knees.

“Unlike normal walking where each heel-strike dissipates energy that can be potentially restored, stair ascent is actually very energy efficient; most energy you put in goes into potential energy to lift you up,” said Karen Liu, an associate professor in Georgia Tech’s School of Interactive Computing.
She says that descending stairs was viewed as being wasteful in regard to energy preservation. Your body is also expending more energy to prevent itself from falling forward.

This invention was born when the researcher herself watched her 72-year-old grandmother struggle to climb the stairs.

Liu says, “Current solutions for people who need help aren’t very affordable. Elevators and stair lifts are often impractical to install at home. Low-cost, easily installed assistive stairs could be a way to allow people to retain their ability to use stairs and not move out of their homes.”

While more research into this new invention is needed, the researchers are optimistic that energy recycling stairs will become a practical and affordable option.