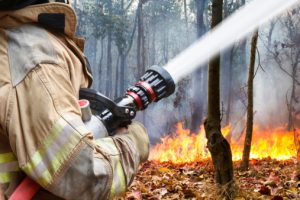 Wildfires have become an all too common occurrence in the United States. So far this year there have been more than 29-thousand wildfires in the U.S. Daily news reports often focus on how wildlife, natural resources and property are at serious risk during these wildfires; however, there is something else at risk – human health.

A study conducted at Monash University in Melbourne, Australia indicates air pollution from wildfires may increase the risk of cardiac arrest and other acute heart problems. The study, which was published in the Journal of the American Heart Association, investigated the connection between exposure to tiny particles of pollution found in wildfire smoke and the risk of heart-related problems in the state of Victoria between December 2006 and January 2007.

The particles they studied were smaller than 2.5 thousandths of a millimeter in diameter, which works out to a size smaller than a speck of dust. The researchers discovered that for an increase from the 25th to 75th percentile in particulate concentration over a two-day period, there was a 6.98-percent increase in out-of-hospital cardiac arrests, with a strong link between pollution and cardiac arrests in men, as well as people age 65 or older. They also noted a 2.07 percent increase in emergency department visits for acute cardiac events.

The research team now emphasizes that when people experience symptoms of heart attack or other cardiac problems during smoke periods from wildfires, they should seek medical help immediately.

Cardiac care costs the U.S health care system billions of dollars every year. This is largely due to the fact that each year more than 700,000 people in America suffer a heart attack. Many community hospitals have had to set up special cardiac care programs to serve patients.

Cardiac care isn’t just about treating the patient when they are in the hospital it’s about ongoing support as the patient learns to adjust his or her lifestyle. In other words, it involves putting heart attack prevention tools in place. People who have already had a cardiac episode and who live near fire-stricken areas are at higher risk of having a second attack. Heart attack prevention means protecting yourself from wildfire smoke.

7 Tips to keep you safe from wildfire smoke:

When you follow the steps listed above, but still have difficulty breathing, consider evacuating the area. If you still don’t feel well, seek medical attention.

Once the dust settles and a fire zone is re-opened, it is only natural to want to pitch in and help with the clean-up; after all it is your community. You do need to proceed with caution though. People think that dust masks will be enough protection, but the paper masks commonly found in hardware stores are designed to trap large particles, not the small particles left behind by a wildfire. Areas covered in soot and dust need to be wet before clean-up in order to reduce air pollutants.

Your cardiac health is important whether you have had a heart attack already, or have never had heart issues. Sadly, the statistics tell us that heart attack prevention is something we all need to think about, especially if we live in an area that is known for wildfires.

Seniors: Do this one thing to cut your risk of heart failure in half

Heartbeat trouble could be atrial fibrillation