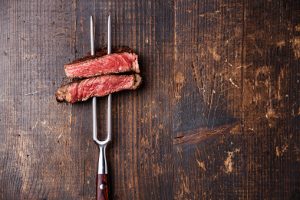 If you’re a vegetarian or vegan, then this article may confirm something you already know. If you do enjoy eating meat, then listen up: your meat-loving habits could be hurting your gut.

A recent study suggests that men who consume excessive amounts of red meat are more likely to develop diverticulitis, a painful inflammatory condition of the colon.

Diverticulitis causes severe abdominal pain, nausea, and constipation, along with a higher risk of tears or blockages in the colon.

Diverticulitis is a common condition among those over the age of 60. It is common for “pouches” to develop along the colon, and many adults who do have these pouches experience no problems. But around five percent of those who develop colon lining pouches go on to develop diverticulitis, where the pouches become inflamed or infected.

Meat consumption is linked with diverticulitis

The study looked at more than 46,000 male health professionals over the course of 26 years. Over this period, 764 men developed diverticulitis. This risk was highest among men who had the greatest meat consumption.

High red meat consumption was categorized as over 12 servings of red meat weekly. Those in the lowest consumption group had slightly more than one serving per week.

Even after the researchers considered other factors that could contribute to diverticulitis, like age, smoking, obesity, lack of exercise, and low fiber intake, the association between meat consumption and diverticulitis risk was still present.

But does the type of red meat consumed make a difference? Sadly, no—burgers, steaks, and other unprocessed red meats all led to the same conclusion.
Although the study shows an association between red meat and diverticulitis, it does not prove cause and effect. But there is plenty of speculation about the connection. The meat-diverticulitis association could be caused by a variety of factors, including overconsumption of meat and a lack of variety in protein choices. Maybe those who consume high amounts of red meat also have other risk factors that contribute to a higher chance of developing diverticulitis.

Another theory is that red meat can affect the gut’s microbiome, which plays a large role in the development of diverticulitis.

It’s important that there is a variety of foods in your diet and that you aren’t overeating one particular type of food. This way, your body stays balanced and you receive all the nutrients you need. You can keep eating red meat, but do it in moderation.

Related: Asthma may be worsened with cured meat