Home » Health News » Asthma may be worsened with cured meat 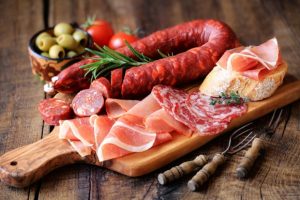 Cured meat may aggravate asthma, according to research findings. The researchers found that regular consumption of cured meats may aggravate asthma. The researchers looked at nearly 1,000 people with respiratory disease and found that the more cured meat one consumed the higher the risk of worsening asthma symptoms – 76 percent higher, to be precise.

As cured meats often contain chemicals like nitrites to keep them from spoiling, consumption of these products is associated with the risk of heart disease, type 2 diabetes, COPD, and other chronic illnesses. On top of that, cured meats have recently been deemed to be carcinogenic, meaning there is a risk of developing cancer.
Lead researcher Dr. Zhen Li explained, “But there remains a gap regarding the spread of knowledge about the harms of processed meat from the research community to the public.”

Still, the study doesn’t prove causality but merely points to an association. It is unclear which components in cured meats worsen asthma symptoms, so further research is needed.

Although the scientists don’t necessarily suggest that limiting or avoiding cured meats will improve asthma, it may be a viable measure to take if you find that your symptoms are worsening and you regularly eat cured meats.

The findings were published in Thorax.

How to avoid holiday allergies and asthma triggers this holiday season

Diagnostic asthma test may not be effective