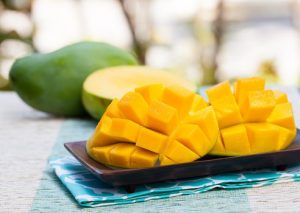 The University of California Davis Department of Nutrition recently published a study on the benefits of consuming mangoes. Mangoes contain mangiferin, quercetin, gallotannins, and gallic acid, which are considered polyphenols. The researchers behind this study feel that the benefits of mangoes may be derived from the polyphenols in the fruit.

The researchers examined the effects of daily consumption of mangoes in a group of postmenopausal women. In total, 24 postmenopausal women participated in the experiment. The experiment lasted for two weeks, over the course of which the participants consumed two cups of mangoes per day. The researchers chose the honey mango variety for this study due to its high concentration of polyphenols.

Consuming mangoes had a significant impact on blood pressure. Within two hours of mango consumption, blood pressure was much lower than when the participants arrived. This was also true for pulse pressure.

At the start of the study, some participants produced certain gases, revealed in their breath samples. Some produced hydrogen, some produced methane, and some produced both or neither. After consuming mangoes, all levels of gas production in the breath was lower than when the participants had arrived.

“This is the first study to demonstrate positive vascular effects of mango intake in humans,” said the study’s lead researcher Robert Hackman, who is a part of the University of California Davis Department of Nutrition. “Our results build on previous animal and cell studies that point to the potential benefits of mangoes to promote health.”

Due to the results of the study, the researchers believe that mangoes may be a heart-healthy fruit and eating it could reduce the risk of cardiovascular disease and be beneficial in maintaining a healthy heart. Because mangoes also showed the ability to lower gas levels in the breath of the participants, the researchers concluded that eating mangoes is also beneficial for gut health and maintaining the proper levels of bacteria in the gut microbiome.

Some questions about the results of this study remain and future research will be needed to adjust for them. As the participants acted as controls after consuming mangoes, it cannot be determined for certain whether all of the benefits of the mangoes had been cleared from the women’s systems at the time of the control analysis.

This study also used a relatively small population size of 24 women. The experimental period was also quite short, only two weeks, so further research will be needed to examine these effects over a longer period of time.