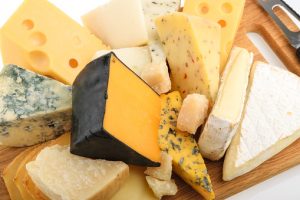 Cheese is one of life’s greatest pleasures: it’s gooey, succulent, and oh so delicious. But we know that too much cheese can be bad for you due to its high calorie count and elevated fat content, but does it also increase cholesterol?

According to a new study, this is not the case. A study published in the journal Nutrition and Diabetes concluded that people who eat a lot of cheese don’t necessarily have higher cholesterol than those who don’t.

This may seem questionable, but the scientists at University College Dublin in Ireland found no link between eating cheese and increased body fat or higher LDL (low-density lipoprotein) cholesterol—the bad form of cholesterol. This “bad” cholesterol often causes deposits to form on artery walls, leading to a condition known as atherosclerosis—hardening and narrowing of the blood vessels. This can lead to increased risk of stroke and heart attack.

The study in question researched the impact of eating dairy products (on average 291g/day), which included milk, yogurt, cheese, cream, and butter. Researchers then studied markers for body fat and health in 1,500 Irish people aged 18 to 90 years old.

The study revealed that a higher intake of dairy was associated with lower body mass index (BMI), a lower percentage of body fat, lower waist size, and lower blood pressure. People who ate a lot of cheese were not found to have higher levels of LDL cholesterol than those who ate smaller amounts or none at all.
Surprisingly, when studying participants’ diets, people who regularly consumed low-fat milk and yogurt were more likely to have higher intakes of carbohydrates and were found to have to have higher levels of LDL cholesterol.

The outcome of this study suggests that dairy products, particularly milk and yogurt, are good options for a healthy diet that helps maintain weight and contributes to keeping blood pressure and blood glucose regulated. The saturated fats found in dairy products like cheese and nutrients should be considered in a wider context of a person’s diet and not alone.

“We have to consider not just the nutrients themselves but also the matrix in which we are eating them in and what the overall dietary pattern is, so not just about the food then, but the pattern of other foods we eat with them as well,” said lead author Dr. Emma Feeney.

Is cholesterol a lipid?

Cholesterol in eggs and egg whites: Understanding the myth