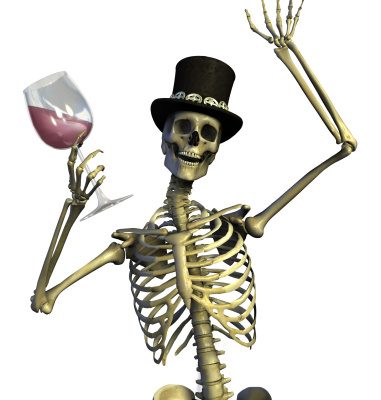 An interesting study has shown that there could be a few health benefits found at the bottom of your next beer, or glass of wine. While alcoholism is considered to be a risk factor for osteoporosis the fractures related to it, there is new evidence that shows a couple drinks could help keep up your bone health.

The studies compared the drinkers to the people who totally abstained, and showed that people who drank up to one drink a day were 20 percent less likely to suffer hip fractures, while people who drank more than two drinks a day had a 39 percent increased risk. Alternatively, drinking more than two alcoholic drinks per day was associated with an increased risk for hip fracture associated with Osteoporosis. The study appeared in the American Journal of Medicine.

Bone Health and Fractures – What Can Alcohol Really Do?

Study authors commented on the extensive data saying that while the information is promising, it isn’t clear exactly how much alcohol, or specifically what type is optimal maximizing bone density and lowering hip fracture risk. But one thing has been established, according to the National Osteoporosis Foundation, 3 drinks or more per day is too many, and could have negative risk factors associated with bone health, fractures, Osteoporosis and general health, too.

The fracture risk assessment model which was recently published by the World Health Organization (WHO), 3 drinks per day (or more) as a serious risk factor for fractures caused by weakened bones.

Researcher Karina Berg, MD, of Montefiore Medical Center in the Bronx commented saying, “The benefits of moderate drinking are debatable,” she says. “It may be true, as this (analysis) suggests, that in small amounts alcohol is protective against fracture. But the evidence linking excessive drinking to a higher risk of fracture is much stronger.”

“Each person has to evaluate their own risk, and no one who doesn’t drink should start drinking based on this research,” she says.

The Mayo Clinic also showed some support to the idea that the benefits of “moderate alcohol consumption” should be considered, saying small amounts of alcohol can lower your risk of developing heart disease or suffering from a stroke, dying of a heart attack, as well as lower the risk of gallstones.