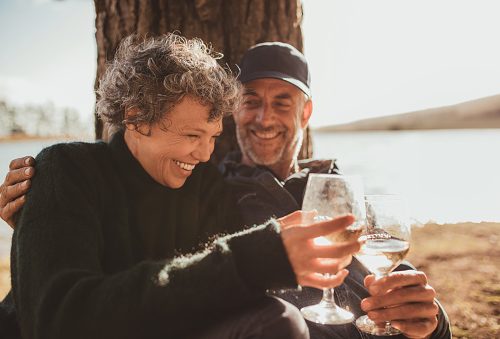 Drinking alcohol—be it a couple of beers or a glass of wine—is generally considered a weekend or special occasion activity, but according to a new study, having a drink every day may help protect a person’s heart against disease.

Yes, the beverage commonly associated with good times and drunken stupors may actually save lives, albeit with a couple of caveats. Drinking in excess will do the exact opposite, increasing the risk for a variety of heart problems.

Researchers at Cambridge University, England tracked more than 1.9 million healthy British adults and found that having the occasional drink was linked to a reduced risk of heart attack, sudden heart death, heart failure, and stroke when compared to non-alcohol drinkers. The researchers went on to say that individuals who do not normally drink alcohol should not feel pressured to start drinking for the sake of their health, even though the study showed some potential benefit from casual drinking.

“There are safer and more effective ways of reducing cardiovascular risk, such as increasing levels of physical activity, maintaining a healthy diet, and quitting smoking, which do not incur increased risks of harm such as alcohol dependence, liver disease and certain types of cancer,” said lead researcher Steven Bell.

“We have shown that heavy drinking increases a person’s risk of developing a variety of different types of cardiovascular disease as well as raising their risk of dying from non-cardiovascular causes,” Bell said.

These results were reached by analyzing electronic health records for nearly 2 million adults with good heart health and investigating the potential link between alcohol consumption and 12 cardiovascular diseases. The study is consistent with earlier results that have indicated a potential heart health benefit from drinking on occasion. Alcohol consumption has also been linked to increases in HDL—a good form of cholesterol—and increases in properties in the blood that reduce blood clotting. Not to mention the fact that it’s a time-honored tradition for reducing stress levels.

Despite having a very large pool of subjects for the study, it was not a formal experiment and did not prove a cause-and-effect link between moderate drinking and heart health. However, the results indicate that U.S. guidelines for healthy drinking appear to be on the right track. It considers a healthy drink to be 12 ounces of beer, 5 ounces of wine, or 1.5 ounces of liquor, according to the U.S. Centers for Disease Control and Prevention. If you’re a man, never have more than two drinks in a day, and if you’re a woman, never have more than one drink a day.