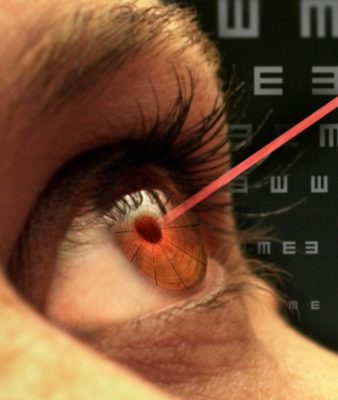 Eye care has entered the aesthetic era. We have seen the transition from bulky eye glasses to contact lenses, and now with laser eye surgery being used for correcting eye impairments, we could see the elimination of glasses or contact lenses altogether.

Laser eye surgery (also called LASIK) is a simple procedure whereby the shape of the cornea (a clear layer covering the eye) is corrected using a laser so that the light passing through it falls on the retina. Ophthalmology studies report that about 95 percent of patients are satisfied with their new vision.

Despite this fact, patients need to be aware of the possible side effects associated with LASIK. An estimated 6 million Americans underwent Laser eye surgery that permanently reshapes the cornea. There are no guarantees of 20/20 vision and the long-term safety of the procedure is still unknown. A small number of patients have reported permanent damage to their eyes following the surgery.

Following are some of the most common side effects experienced after having laser eye surgery.

In some cases, patients need to wear corrective lenses even after having laser eye surgery due to under correction or overcorrection as not all patients respond same to the surgery.

Some patients with poor outcomes from LASIK surgery report a significantly reduced quality of life because of vision problems or physical pain associated with the surgery. Most experienced and reputable clinics tend to do a full-dilation medical eye exam prior to surgery and give adequate post-operative patient education care to minimize the risk of a negative outcome.

Just like every procedure, laser surgery can also prove to be a double edged sword if not handled with care. Prospective patients need to carefully weigh the risks and benefits of such a procedure based on personal value system as satisfaction is directly related to expectation. It is highly recommended to discuss all possible side effects with a surgeon before deciding to go ahead and have laser eye surgery done.