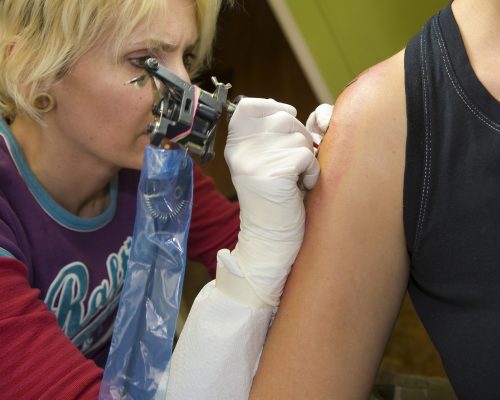 If you have vitiligo, should you get a tattoo? This question is more common than you think. Vitiligo is a condition in which the skin loses pigment, resulting in white patches. Tattoos have been around for centuries as integral cultural part of personal expression.

The simple answer to the question – does vitiligo affect tattoos? – is no. A person with vitiligo can get a tattoo, but there are some factors to consider.

For starters, you must take into consideration the stability of your vitiligo. It’s important to avoid tattooing the area that has lost pigment or to try getting a tattoo to match your skin tone. Skin color changes through the seasons, so in winter your color-matched tattoo may appear like your skin, for example, but in summer you will begin noticing skin color differences once again. Furthermore, the vitiligo-affected area could grow over time, so you may discover that a patch covering the white skin now has a ring of white around it.

Additionally, tattooing the affected skin could cause damage and sometimes the needle could worsen vitiligo or even create new spots.

If you have vitiligo, you do have a lot to think about with regards to getting a tattoo. For example, will you still like the tattoo if it becomes lighter due to new bout of vitiligo?

Aside from artistic and personal tattoos, there is a new method of tattooing specifically for the white spots found in vitiligo.

Vitiligo micropigmentation tattooing is a recent technique that allows patients with vitiligo to cover up their white spots. In this technique, the pigment of the tattoo closely resembles your skin color and can cover the entire white patch.

There are still concerns that tattooing could cause vitiligo to spread, but to gauge this, you will notice such a thing occurring around scratches and scars. Individuals who have experienced a scratch or a scar and noticed that new vitiligo spots began to form around the wound often do not opt for tattoos for this reason. If this reaction does not occur, then it is less likely that it will be triggered by a tattooing needle.

Micropigmentation tattooing, although effective, is not an easy task. Matching the ink to a person’s skin tone is particularly difficult. It has been found that those with darker skin tones have greater success in finding a matching pigment of ink.

You may want to begin micropigmentation tattooing on areas that are usually covered – like your back, for example – before making the decision to use the technique in more visible places, such as your hands or arms. As for spots on your face, many artists will only perform micropigmentation on small areas, but these can simply be covered with makeup rather than a tattoo, anyways.

Vitiligo tattooing and its side effects

Vitiligo tattooing does come with its own risks and side effects, including recurrences of herpes simplex, chronic granulomatous reactions to implanted pigments, allergic reactions, koebnerization, imperfect color matching ,and cutaneous pseudolymphomas.

Prior to tattooing your vitiligo spots, speak to a professional about the risks and take the time to really weigh out the pros and cons. To rule out any possible allergies, it is best to get tested and also it is important to be mindful to know for sure what foods you should steer clear of. Earlier we had written about the vitiligo diet chart and foods to eat and avoid.

Vitiligo is a skin condition in which the pigment of the skin is lost in certain areas, making the skin to appear white. Although a vitiligo-specific diet isn’t supported by too much scientific data, skin specialists still recommend a vitiligo diet in order to boost the immune system, as vitiligo is an autoimmune disease and a strong immune system can prevent the spread of the disease. Continue reading…