Home » General Health » Does hypothyroidism increase the risk of cognitive impairment and dementia in elderly? 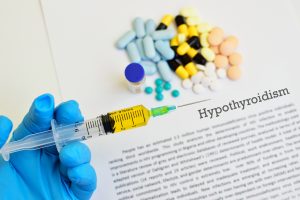 Does hypothyroidism increase the risk of cognitive impairment and dementia in the elderly? If you’ve ever asked yourself that question you are among the many others who ponder it as well.

“It turns out that our TSH levels tend to drift up with age, such that by the time we’re over 80, the upper limit of the TSH has been observed to be over six to seven. In these studies, people were considered to have subclinical hypothyroidism if their TSH levels were greater than four to five,” Dr. Hennessey explained.

Signs of subclinical hypothyroidism are often so subtle that most patients brush them off or believe these are signs of aging as opposed to a more serious underlying condition.

There are currently no guidelines for TSH screening, so if you start spotting the signs – dry skin, paleness, puffy face, constipation, hoarse voice, weight gain – you may want to have your levels checked by a doctor.


Hypothyroidism and its association with mild cognitive impairment in elderly

Whether your thyroid is overactive or underactive, either one can have implications on your health, including impact on the brain health. Hypothyroidism is associated with mild cognitive impairment in the elderly, and running thyroid tests is fairly common when individuals report memory problems.

In one study, researchers analyzed face-to-face interviews along with neurological and psychological tests. Patients were classified by thyroid function including euthyroid (with normally functioning thyroid), clinically hypothyroid, or having subclinical hypothyroidism. There were a total of 1,904 patients involved.

The researchers suggest performing additional studies as the results came up mixed.

Hypothyroidism in women is a common condition in which the thyroid gland underproduces necessary thyroid hormones that help the body function. The thyroid is responsible for many functions, including metabolism and hair growth. Many hypothyroidism patients gain weight, for example, because their metabolism slows down. Continue reading…

Hypothyroidism increases mortality risk among heart failure patients. Researcher Dr. Connie Rhee said, “Our data suggest that mild hypothyroidism may, in fact, be harmful in specific populations, including people with heart failure. A ‘one-size-fits-all’ approach may not be appropriate for assessing risk and determining whether treatment is required for subclinical hypothyroidism.” Continue reading…