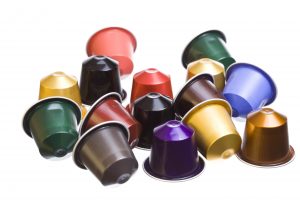 We all love a good cup of coffee. We love it in the morning to jump-start our day. We love how it soothes us on a lazy Sunday with the paper.

Some of us can’t even skip a single day without the stuff, thanks to the addictive caffeine. Recent studies have found that drinking coffee is a healthy habit in moderation, enhancing athletic performance, increasing mental alertness and protecting against serious diseases such as Alzheimer’s, Parkinson’s and even liver and colon cancers.

And now, with the popular single-serving cups, your coffee fix has become ultra-convenient. Unfortunately that convenience might come at serious cost.

Owned by Green Mountain Coffee in Vermont, Keurig is a coffee brewing system known for creating individual 2×2-inch serving pods called “K-Cups.” A simple concept: All you have to do is click a button and voilà – the machine punctures a hole into an aluminum lid of a plastic cup packed with coffee grounds which are flushed with steaming water. The result is a quick and easy cup of coffee.

RELATED READING: Could You Be Developing This Disorder?

While machines like this once may have seemed like a novelty, they’re now a must-have in home and office kitchens. Almost one in five adults drinks single-cup brewed coffee, according to the National Coffee Association (yes, there is such a thing!). These coffee pods now are a billion-dollar industry that doesn’t appear to be slowing down. After all, the pods are uber-convenient and take a matter of seconds to brew.

With the single-serving beverage industry exploding, we have to wonder – what exactly is the impact on our health and the environment?

Do We Need More Landfill Waste And Toxins?

Using the Keurig is easy. Users can toss their used K-Cups into the trash… no mess! But single-cup packaging isn’t environmentally-friendly. The individual pods require more packaging which, of course, goes straight to your local landfill. And have you considered the possible contaminating toxins seeping into the earth and groundwater?

Cleaning the machine is laughably easy: Just chuck the used coffee pod in the trash, then press a button and a “cleansing brew” shoots hot water through the system to clear it of residue.

But critics warn that the packaging needed for these systems comes with environmental and health-related problems. By making each pod so individualized and so easy to dispose of, you must also exponentially increase the packaging – packaging that ultimately ends up in landfills.

RELATED READING: Why The Coffee You Just Bought May Contain Toxins

According to Murray Carpenter, journalist and author of Caffeinated, if you lined up a row of all the K-Cups produced in 2011 and circled it around the globe, it would loop around more than  six times. Last year, a staggering 8.3 billion K-Cups were produced by Green Mountain. That means that lined up, they would wrap around the world 10.5 times. Frightening! Only 5 percent of the cups are made out of recycled plastic. The rest are made of non-recycled composite plastic that just doesn’t break down.

Keurig says they have plans underway to make their pods recyclable, biodegradable or compostable. However, to protect the perishable product within the cups, the materials used in the packaging have to protect against moisture, oxygen and light, so coming up with the perfect environmentally friendly cup has its challenges. Some of its single-serving pod competitors are partially or almost entirely recyclable or biodegradable.

Despite the ill effects on the environment, the particular plastic used to make Keurig K-Cups does meet FDA standards. And while the plastics are BPA-free, they can still test positive for estrogenic activity – chemicals present that act like the sex hormone estrogen.

The truth is, we don’t know much about the K-Cup “#7 plastic.” The Centers for Disease Control and Prevention (CDC) warns that it contains a chemical called polystyrene, a possible carcinogen that can damage the nervous system of those who handle it. This should set off alarm bells for workers involved in producing these plastics, which are also found in Styrofoam and tobacco smoke.

The bottom line is simple. These convenient quick cups of coffee are expensive, environmentally damaging and potentially destructive to human health. So consider sticking to freshly ground coffee and expend a little more time and effort. That way you can skip the plastic pods and the associated guilt, and keep the flavor and caffeine kick intact.

Mother Earth will most certainly thank you!