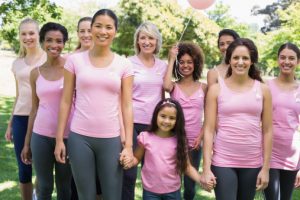 The study looked at 5,644 women who received mammographic screening between 1993 and 2001. Associate professor Dr. Zorana Jovanovic Andersen reported, “Women with diabetes were less likely to have mixed or dense breasts, as opposed to fatty ones, both before and after adjustment for other factors such as being overweight.”

Similar associations were seen among 44 women who had controlled diabetes solely by diet and 62 diabetics who took oral medications. Women who used insulin injections were found to have increased odds of mixed or dense breasts.

Dr. Andersen added, “Diabetes is associated with an increased risk of breast cancer, but the exact mechanisms which bring this about are still unclear. One of the characteristics of cancer cells is their ability to grow rapidly and uncontrollably, and to resist the programmed death that occurs in non-cancer cells. Therefore, growth factors are critical to cancer development and progression. We know that insulin is an important growth factor for all body tissues, and even if we do not know exactly how it affects the development of cancer cells, it is also highly plausible that it increases breast density.”

“Our study looked solely at the effect of insulin on breast density. Now we would like to extend our research by following up these women for breast cancer and observing the effect of different diabetes treatments on breast cancer risk. If we find a relationship, we need to examine whether a high [mammographic density] is responsible, or whether other factors are involved,” said Dr. Andersen.

The researchers intend to conduct a larger scale study on mammographic density data and link it to specific insulin treatments from the Danish Prescription Registry.

Dr. Andersen concluded, “Denmark is fortunate to have such a large MD data set, which, through the DCH study group, can be linked to many different issues that may influence health outcomes. The possibility of analyzing such detailed information in a coherent group means that we have the ability to undertake additional studies in order to further investigate the relationships between breast density and other risk factors for breast cancer. In the meantime, we would urge all women, both with diabetes and without, to take measures to reduce their risk of developing breast cancer through simple lifestyle changes, such as avoiding obesity, reducing alcohol consumption, and exercising.”


Connection between diabetes and breast cancer

Controlling glucose levels in diabetes is important as uncontrolled glucose levels can cause damage to the blood vessels and the circulatory system, resulting in kidney failure, lower limb amputations, and even vision loss. Although this may not seem as if it is associated with breast cancer, in fact, it has been reported that there are higher rates of breast cancer among diabetics than those without diabetes.

Fifty years ago, it was first reported that breast cancer was most common in type 1 diabetes, but recent research has shown a more specific link between type 2 diabetes and breast cancer.

Postmenopausal women over the age of 50 with type 2 diabetes have been found to have a 20 to 27 percent higher risk of breast cancer. Although the link between the two isn’t as clear, it is speculated that the damage caused by uncontrolled glucose levels and inflammation can contribute to breast cancer. Additionally, type 2 diabetes and breast cancer share many common risk factors, including being overweight or obese, and lacking exercise and physical activity, to name a few.

Furthermore, it has been observed that women with type 2 diabetes and breast cancer have a 50 percent higher risk of death. It is then even more important to manage your diabetes to not only reduce your risk of breast cancer, but to avoid worsened complications of the condition.

Gestational diabetes is a type of diabetes that only occurs during a woman’s pregnancy, although data shows that it can turn into type 2 diabetes after a person gives birth. Your body needs glucose for energy, but too much glucose in the blood is not good for the baby. If you have blood sugar that is too high then you have diabetes. Gestational diabetes is typically diagnosed during the late stages of pregnancy. Continue reading…