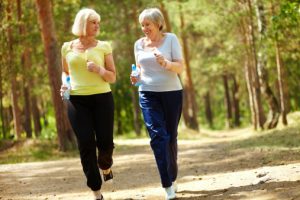 Men and women generally have similar rates of type 2 diabetes and those rates continue to climb with each passing year.

Researcher Judith G. Regensteiner said, “Cardiovascular disease may be more deadly for women with type 2 diabetes than it is for men. While we don’t fully understand how the inherent hormonal differences between men and women affect risk, we do know that some risk factors for heart disease and stroke affect women differently than men and there are disparities in how these risk factors are treated.”

Research suggests that women with type 2 diabetes would benefits from more vigorous activity as a means of protecting their heart and lowering their risk of heart attack and stroke. Along with improved diet, women should exercise more intensely and more frequently than men in order to protect their health.

Regensteiner added, “To improve health equity in women and men with diabetes, we need to understand and improve both the biological reasons for the disparities and also control cardiovascular risk factors equally in both women and men. This statement is a call for action to do the compelling research that is so important for all people with diabetes.”

Rita Rastogi, lead author, said, “Our findings suggest that we need to work harder to prevent heart disease in women under 60 who have diabetes. This study tells us that women of any age who have diabetes are at a high risk for coronary artery disease.”

The researchers looked at over 10,000 participants from three studies: the GeneSTAR Research Program, the Multi-Ethnic Study of Atherosclerosis, and the National Health and Nutrition Examination Survey (NHANES) III. None of the participants had a history of heart disease and all three studies revealed gender differences in coronary artery disease and diabetes status.

The researchers outline numerous explanations for the differences, citing genetic and hormonal factors on the heart, differences in adherence to healthy lifestyle options, and differences in compliance with cardiovascular treatments. Additional research is required to confirm this theory.