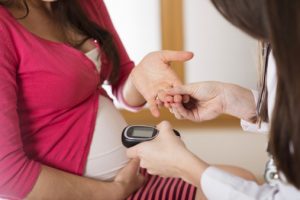 Gestational diabetes is a type of diabetes that only occurs during a woman’s pregnancy, although data shows that it can turn into type 2 diabetes after a person gives birth.

Your body needs glucose for energy, but too much glucose in the blood is not good for a baby. If you have blood sugar that is too high then you have diabetes. Gestational diabetes is typically diagnosed during the late stages of a pregnancy. Those who are diagnosed early in their pregnancy may in fact have had the medical problem before they even became pregnant.

The authors of the McGill study have said their work suggests that couples share risk due to their “shared social and cultural environment, which may contribute to “health behaviors and attitudes.”

So what are the causes of gestational diabetes? It’s important to understand that it happens when the body can’t make insulin during pregnancy. The pancreas makes insulin, which helps the body use glucose for energy and control blood glucose levels. During pregnancy, the body makes more hormones though and goes through many changes, including weight gain, of course. All the changes lead the body cells to use insulin less efficiently. This is called insulin resistance.  The problem is that it increases the body’s need for insulin, and if your pancreas can’t make enough insulin you will get gestational diabetes.

Here are some reasons why some women may be more prone to gestational diabetes: 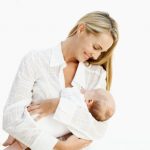 Gestational diabetes can be controlled and you can have a perfectly health baby. When it is not controlled, it can cause problems for you or your baby. One of the common outcomes is the need for a C-section delivery. There are other complications as listed below.

Untreated gestational diabetes can be a matter of life and death. It means that a baby could die before birth or shortly after being born.

When it comes to gestational diabetes treatment, there are several approaches. But first and foremost you must monitor your blood sugar often while you are pregnant. Some doctors will instruct you to check your level four or five times a day to make sure you are staying within a healthy range.

Maintaining a healthy diet with reasonably sized portions is often a helpful way to control blood sugar. Many people have demonstrated that weight control keeps their blood sugar level in check. While doctors don’t advise trying to lose weight while you are pregnant, they can help you set weight gain goals based on your weight before your pregnancy.

In some cases, medication is required for gestational diabetes treatment. For example, insulin injections may be needed to lower your blood sugar. Research shows that between 10 and 20 percent of women with gestational diabetes require insulin. Some doctors prescribe an oral medication for blood sugar control, but many in the medical field feel that more study is needed to test the safety of this oral treatment.

If you are concerned about risk factors, then consider gestational diabetes prevention. For instance, select foods that are high in fiber and low in fat and calories. Eating healthy by focusing on good foods can really do wonders when helping control blood sugar. Fruits, vegetables and whole grains are excellent diet options.

It is also important to keep active during your pregnancy. Many specialists will recommend that you try to fit at least 30 minutes of moderate activity into your day when you are pregnant. This could mean a swim or brisk walk.

Although, doctors do not recommend losing weight during pregnancy, they do suggest trying to drop a few pounds before you conceive if you are planning to get pregnant and are concerned about your current weight. It could help you have a healthier pregnancy.

When many women think about becoming pregnant or discover they are expecting, they think about lifestyle changes. For example, giving up alcohol, caffeine, smoking, or processed foods. Obstetricians say they need to take it a step further and think about all choices, including food portions and exercise. A healthy lifestyle has long been associated with becoming less insulin resistant, so it makes sense that the same would apply to pregnancy.

If you happen to have gestational diabetes right now, you’ll have to have a glucose test about six to 12 weeks after delivering your baby. It’s important to follow up to determine whether you will have type 2 diabetes. The American Diabetes Association also recommends repeat testing at least every three years.