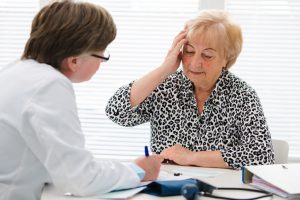 Three percent to 63 percent of patients with mild cognitive impairment experienced depressive symptoms, and some studies have shown an increased risk of dementia in those with a history of depression.

Baseline depression was associated with prevalent mild cognitive impairment and dementia, as well as an increased risk of dementia. Those with coexisting depression and MCI had a higher risk of progression to dementia – vascular dementia, in particular – but not Alzheimer’s disease.

The authors concluded, “Our finding that depression was associated cross-sectionally with both MCI and dementia and longitudinally only with dementia suggests that depression develops with the transition from normal cognition to dementia.”


Older adults with depression and mild cognitive impairment may be prone to accelerated brain aging: Study

Seniors with major depression have double the risk of dementia in later years, compared to seniors without depression.

Senior investigator Meryl A. Butters said, “Our study represents a significant advance because it provides a more comprehensive and integrated view of the neurobiological changes related to mild cognitive impairment in late-life. Better understanding of the neurobiology of cognitive impairment in depression can provide new targets for developing more specific treatments, not only for its prevention and treatment, but also for its downstream negative outcomes, including the development of dementia and related disorders.”

Blood samples were collected from 80 older adults in remission after being treated for major depression – 36 had mild cognitive impairment and 44 had normal cognitive function. Their blood was tested for 242 proteins involved in biological pathways associated with cancer, cardiovascular disease, and metabolic disorders. MRI and PET scans were also conducted to look for traces of brain shrinkage and other changes in the brain.

The MCI group was more likely to have differences in biologic activity of 24 proteins that help regulate immune and inflammatory pathways, intracellular signaling, cell survival, and protein and lipid balance.

Dr. Butters concluded, “If you take these results altogether, they suggest that people with depression and cognitive impairment may be more vulnerable to accelerated brain aging, which in turn puts them at risk for developing dementia. Ultimately, if we can understand what happens in the brain when people are depressed and suffer cognitive impairment, we can then develop strategies to slow or perhaps stop the impairment from progressing to dementia.”