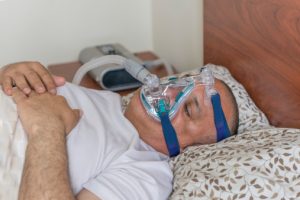 Only four percent of sleep apnea patients sustained depressive symptoms while adhering to CPAP treatment for three months. The study used 41 sleep apnea patients who had previously noted feelings of self-harm or reported being “better off dead.” By adhering to CPAP treatment they saw improvements in depressive symptoms after three months of CPAP therapy.

The study group had 426 new patients who were evaluated for suspected sleep apnea. Depressive symptoms were assessed using Patient Health Questionnaires and sleep apnea was diagnosed in an overnight lab. From the group, 239 patients were diagnosed with sleep apnea and prescribed CPAP therapy. The patients were told to use the CPAP therapy for at least five hours a night on multiple nights for three months.

The researchers suggest their findings stress the importance of screening for depressive symptoms in sleep apnea patients. Along with regular questioning about symptoms, including level of tiredness and snoring, they should be further queried about symptoms of depression.

The findings were published in the Journal of Clinical Sleep Medicine.