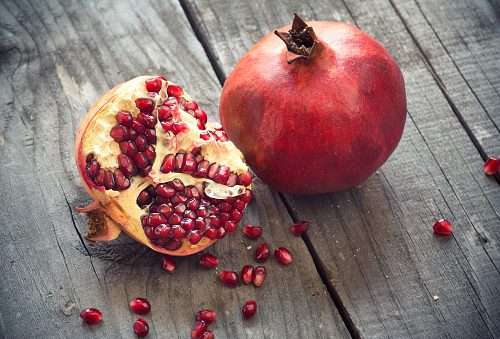 The quest for the elixir of eternal youth has been occupying the minds of doctors and scientists for centuries. Alchemists were looking to formulate the perfect potion that would cure diseases and prolong life. The Hindu scriptures tell us about Amrita, the sweet-tasting nectar of immortality. In ancient China, emperors would send off their medics overseas to search for the coveted potion, albeit to no avail—many scientists would never return home.

Fast-forward to the incredible medical advancements of the twenty-first century—penicillin, vaccines, neurosurgeries, stem cells. We have access to treatments that none of the generations before us could even dream of, but the ultimate key to eternal youth has yet to be found. However, the recent discovery of a wonder molecule found in a common fruit (an antioxidant superstar, actually) may be the key to helping us remain youthful.

Health experts and dieticians have been singing praises to this fruit for a long time, and for good reason. Pomegranate helps support cardiovascular health, reduce inflammation, lower cholesterol, and even boost testosterone levels. A rich source of fiber and vitamin C, pomegranate can even protect against some types of cancer and brain disorders. And now the research out of École Polytechnique Fédérale de Lausanne (EPFL) is bringing the fruit into the limelight yet again, only this time, it’s giving hope that we may finally unlock the secret to eternal youth. (This “all-in-one” anti-aging formula is so effective, the big cosmetic companies call it unfair.

A unique molecule called urolithin A “can relaunch the mitochondrial clean-up process,” according to the co-author of the study, Patrick Aebischer. Trials on older mice exposed to the molecule revealed an impressive cellular recycling process, along with a 42 percent increase in endurance while running, compared to the control group.

Incredible, right? But here’s where it gets tricky. What pomegranate contains is not urolithin A itself, but rather its precursor, another molecule that is converted to urolithin A by the gut microbes. The problem is, intestinal microflora varies greatly among people and, as a result, the amount of urolithin A produced varies as well. Some people, due to specifics of their microbiome, cannot produce any urolithin A at all, so no amount of pomegranate juice would make a difference for them. (Your best defense against the #1 cause of premature aging is this.)

To address this issue, the researchers founded a start-up company called Amazentis and developed a way to deliver finely calibrated urolithin A. The first clinical trials on humans are already underway in European hospitals. If found effective, urolithin A opens up new possibilities for counteracting muscular degeneration and other effects of aging. With breakthroughs this exciting, there’s hope that we are one step closer to the elixir of youth.

Related: Drink this for pain-free joints