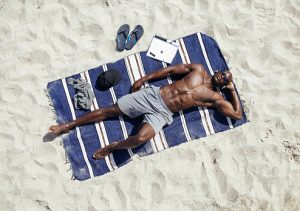 We are gearing up for the summer months, pulling out our shorts and T-shirts. Feeling the sun on our skin can be pleasurable, especially after months of wearing layered clothing. Increased sun exposure prompts people to begin wearing sunscreen to prevent sunburn. However, it rarely crosses the minds of those with darker skin tones.

It is commonly thought that, if you are fair skinned, you have a higher chance of developing sunburns and a higher chance of developing melanoma—skin cancer. Those with darker skin tones are thought to have a natural protection against the sun’s harmful rays. But according to new research, this is just not true, as death rates for deadly skin cancer are higher for people of color.

Melanoma is the most dangerous form of skin cancer. It is a cancerous growth that develops when ultraviolet radiation from the sun damages the DNA of skin cells, triggering mutations. Melanoma often looks like a mole, but it appears asymmetric and changes in shape over time. If melanoma is not recognized and treated early, cancer can advance and spread to other parts of the body.

New research suggests that dark skin does not offer protection against deadly melanoma.

While this form of skin cancer has a genetic component, it is far more likely to develop in sun-protected areas of the body in black, Hispanics, and Asians.

“The misconception that the sun is responsible for all cases of melanoma leads to lower survival rates because of delayed diagnosis, particularly among people of color,” according to researcher Dr. Arthur Rhodes, director of the Melanoma Surveillance Clinic at Rush University Medical Center in Chicago.

Approximately only 10 to 15 percent of melanomas are due to excessive sun exposure. They are typically found in heavily freckled and sun damaged skin. The incidence of reported cases of melanoma are higher in the white population, however, death rates from the cancer are higher among people of color.
“Far too often, black, Hispanic, and Asian patients with melanoma cancer tell us they believed that melanoma was only a danger for sun-seeking whites. But anyone — regardless of skin color — may develop melanoma, in both sun-exposed and sun-protected sites. Not noticing or ignoring a new or changing mole in a sun-protected site can be fatal,” said the study authors.

Melanomas can develop in hidden areas, such as the nail beds, mucous membranes, or even the genitalia, making it difficult to self-examine. This is one reason it goes undiagnosed.

The researchers stress that early detection is crucial for this type of skin cancer. They recommend monthly self-examinations. If you see any new moles or notice changes in the size, shape, or color of a pre-existing mole, seek the aid of a medical professional right away.