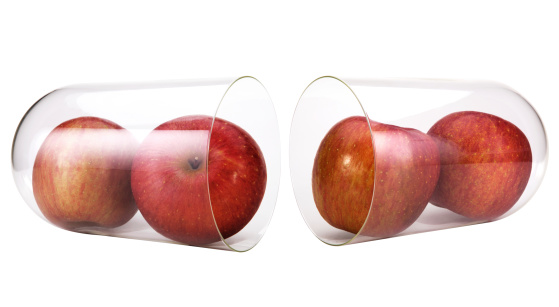 Skin cancer is the most prevalent form of cancer in the United States, and one in five Americans will develop it in the course of their lives.[i] There are three main types of skin cancer – basal cell carcinoma, squamous cell carcinoma and melanoma; of the three, melanoma is considered the most serious. Unfortunately, there is currently no single therapy that can effectively treat all melanomas, causing melanomas to be responsible for the majority of skin cancer deaths.

However, a promising new research study has found that a natural component of many fruits and vegetables could hold the very key we’ve been looking for to finally combat this deadly disease.

The Astonishing Effects of Gossypin on Skin Cancer

There are two types of cell mutations that cause the majority of melanoma, called BRAFV600E kinase and CDK4.  Researchers at the Texas Biomedical Research Institute examined the effects of a newly discovered plant agent, called gossypin, on melanoma cells in vitro and in mice, and they were amazed to discover that gossypin prevented the growth and multiplication of both types of human melanoma cells.[ii]

The researchers also implanted the two types of mutated cells into mice, and treated the mice with gossypin. After just ten days of treatment with gossypin, the melanoma cells were visibly smaller and the rats experienced an increased survival rate.[iii]

“Our results indicate that gossypin may have great therapeutic potential as a dual inhibitor of mutations called BRAFV600E kinase and CDK4, which occur in the vast majority of melanoma patients. They open a new avenue for the generation of a novel class of compounds for the treatment of melanoma,” reports Texas Biomed’s Hareesh Nair, Ph.D.[iv]

Nature May Hold the Key to Skin Cancer and Good Health

Gossypin may not only help treat melanoma skin cancer either; preliminary studies have also found that it may help to reduce stress and treat depression.[v] In addition to fruits and vegetables, many herbs contain gossypin, and hibiscus is a particularly potent source.[vi]

There are many cancer fighting agents out there, but the discovery of gossypin is exciting and innovative because, unlike the chemically-based treatments doctors are currently relying on, gossypin is a naturally occurring compound, called a flavone, found in fruits and vegetables. Flavones are a type of plant flavonoid, and flavonoids are known to reduce inflammation and act as strong antioxidants in the body, helping to prevent damage to your cells and DNA. Numerous other types of flavonoids (silymarin, lutein, etc.) have also been found to have a positive effects against skin cancer.

Aside from cancer, researchers have also found that flavonoids help to slow down aging and to prevent a number of diseases, such as Alzheimer’s disease, heart disease and some cancers. While gossypin research still has to be developed further, the message emerging amongst all of this building research is nevertheless loud and clear – eat your fruits and veggies!