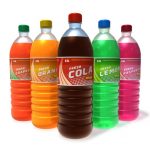 
Every time I see a friend or a loved one crack open a can of diet soda, and especially if I hear of one of my patients drinking them, I can’t help but shudder. Unfortunately, the majority of the population has been brainwashed to believe that diet soda is a perfectly benign beverage, and some people even believe that they are doing something good for their health by drinking it. These assumptions couldn’t be further from the truth however, and before you take one more sip of that highly processed, artificial beverage, you need to understand the health risks that you are taking.

I hear it from patients all the time – they drink diet soda when they are trying to lose weight because it is both sugar free and calorie free. However, one key piece of information that I implore all of you to be aware of, is that there is much more to losing weight than just calories in versus calories out. In fact, did you know that even though there are no calories in diet soda, people who drink it are actually more likely to gain weight than to lose it?

Science shows that when you consume diet soda, the artificial sweetness actually tricks your body into anticipating calories. When no calories are delivered, your body and brain become confused and you experience insatiable hunger and strong cravings for high calorie, sugar laden food. Sooner or later drinking diet soda causes you to gain weight, because it encourages you to eat more and to make poor food choices. In fact, a study conducted at the University of Texas found that people who drink two or more diet soda beverages daily for ten years have a whopping six-times-larger increase in waist circumference than people who avoid diet soda altogether. Those are some scary statistics!

Diet Soda and the Frightening Side Effects

One of the problems at the core of the diet soda controversy is the fact that most diet sodas are made with this highly toxic sugar substitute known as aspartame. You’ve heard the word “aspartame” many times, and it’s got a negative connotation for a very good reason. Over 75 percent of adverse food reactions that are reported to the Food and Drug Administration (FDA) are attributed to aspartame. And even the FDA does not deny that aspartame can cause multiple troublesome side effects, including: migraines, dizziness, diarrhea, mood swings and memory loss…to name a few!

If that weren’t bad enough, many people have reported experiencing vision loss, insomnia, breathing difficulties, panic attacks, joint pain, numbness and anxiety attacks after consuming aspartame. As a doctor, I know the dangers of aspartame, but did you know about all of these potential issues?

Diet Soda is Bad for Diabetics

Although diet soda is often recommended to diabetics, simply because it is sugar free, multiple studies have found that diet soda is linked to blood sugar imbalances. In fact a Framingham Heart Study found that people who consume diet soda have a 56 percent greater chance of developing blood sugar issues and metabolic syndrome, which is a precursor to diabetes. Many holistic practitioners and doctors have also found that aspartame reduces the ability to control diabetes through insulin, and it worsens diabetic disorders such as cataracts, retinopathy and neuropathy in their diabetic patients.

Diet Soda Can Dehydrate You

Many people get sick of the bland taste of water, so they use diet soda as a flavored substitute thinking they are actually doing their bodies some good. However, in contrast to water, diet soda can actually reduce hydration levels.  This is because the caffeine in diet soda acts as a diuretic and causes your body to release water, resulting in reduced overall hydration. It is crucial I mention this here as 75% of the American population suffers from chronic dehydration.

Why You Need to Stop Drinking Diet Soda Immediately

When you drink diet soda, you not only put yourself at risk for short-term side effects, but you are also increasing your risks for much more serious health effects. Studies done on rats have found that a high consumption of aspartame can lead to cancer tumors and lymphoma. A double blind study also found that it can contribute to behavioral changes, worsen mood disorders and lead to depression.

Many well respected researchers also say that aspartame can cause epilepsy and seizures, as well as diabetes. If you are pregnant, consuming aspartame also puts your fetus at risk for birth defects. There is so much negativity surrounding aspartame, the key ingredient in diet soda. So if you make just one change this winter for the betterment of your health, I highly encourage you to make it the complete elimination of diet soda, as well as all other aspartame containing products.

As a doctor, it is my opinion that aspartame is dangerous for your health. Created to be a dietary substitute for sugar, it has not only failed to fulfill this purpose but has succeeded in the exact opposite, contributing to weight gain and exacerbating diabetes. Therefore, with no benefits to speak of and plenty of documented ill effects, I confidently deem aspartame to be a toxin, that has no place in our bodies. If the FDA does not deny that the effects of aspartame can be severe, why would you consume it? Until this ingredient is removed off the store shelves, do yourself a favor and eliminate it from your diet.