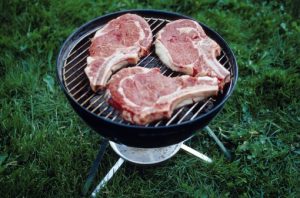 Devotees of a high protein diet similar to the popular Atkins diet may want to reconsider their meal plan. New research has found that eating too much animal protein can be as unhealthy as smoking 20 cigarettes a day. Step away from that barbecue!

An American study from the University of Southern California (USC), published in Cell Metabolism, tracked thousands of adults for two decades and found that middle-aged people with a high protein diet were 74 percent more likely to die of any cause within the study period when compared to those who ate low amounts of protein.

“We provide convincing evidence that a high protein diet – particularly if the proteins are derived from animals – is nearly as bad as smoking for your health,” said USC researcher Dr. Valter Longo.

RELATED READING: The Snack that Can help You Live Longer

High-protein diets came back in favor about 10 years ago when the Atkins diet, which originated in the 1970s, found new popularity. The Atkins diet advises followers to avoid carbohydrates from foods like grains and fruits in favor of high protein foods like bacon, eggs and red meat. More recently, so-called “paleo” or caveman diets are increasingly popular. Proponents claim that eating a diet rich in animal protein and fresh vegetables and fruits, and low in dairy, grains, and added sugars, promotes weight loss and muscle development.
A high protein diet can result in weight loss, yes, but the new research indicates that long-term health consequences may await followers of the Atkins diet and similar plans.

How To Eat Protein And Be Healthy

Just what is a high protein diet? For the purposes of the study, the researchers considered a high protein diet to be one where more than 20 percent of a person’s daily calorie intake was from protein. (The Atkins diet recommends that protein should make up about 30 percent of daily caloric intake.) The USC researchers recommend 0.8 grams of protein per kilogram of body weight in middle age. That means that you should eat about 54 grams of protein daily if you weigh 150 pounds, and 73 grams if you weigh 200 pounds. The average American adult consumes 101.9 grams of protein each day for men and 70.1 grams for women, according to the 2005-2006 National Health and Nutrition Examination Survey.

In particular, protein from red meat and dairy products were found to be harmful. Chicken and fish are healthier sources of animal protein, but it’s still important to watch intake: three ounces – the recommended serving size – of roasted chicken breast has 27 grams, for example, and the same portion salmon filet has 51 grams. Alternately, choose vegetable-based sources of protein like lentils and beans, which are also high in fiber and free of saturated fats and cholesterol.

“The research shows that a low protein diet in middle age is useful for preventing cancer and overall mortality,” said study co-author Dr. Eileen Crimmins. “However, we also propose that at older ages, it may be important to avoid a low protein diet to allow the maintenance of healthy weight and protection from frailty.”

Add more plant-based proteins to your diet, including soy, tofu and beans. Make that steak an occasional treat!