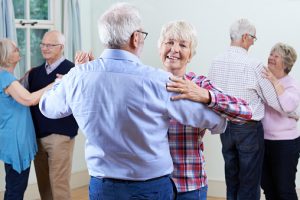 Getting older often means the decline of physical health. Admittedly, we become weaker, more susceptible to disease, and can even injure easily. But perhaps more troubling is our decline in mental function as we age. While dementia is not simply caused by getting old, advanced age is considered a risk factor.

All is not lost, however, as a new study finds that older people who routinely partake in physical exercise can reverse the signs of aging in the brain, and dancing was seen to provide the best effect.

“Exercise has the beneficial effect of slowing down or even counteracting age-related decline in mental and physical capacity. In this study, we show that two different types of physical exercise (dancing and endurance training) both increase the area of the brain that declines with age. In comparison, it was only dancing that lead to noticeable behavioral changes in terms of improved balance,” says Dr. Kathrin Rehfeld, lead author of the study, based at the German center for Neurodegenerative Diseases in Germany.

It is perhaps the engaging nature that dancing provides its participants that helps. It fun to do, a sociable activity, and a great and fun form of activity.

The study in question involved elderly volunteers of an average age of 68 years old. Participants were assigned to either an 18-month weekly course where they learned various dance routines or simply performed endurance and flexibility training.


Exercise is known for promoting both body and mind, with the elderly seeing especially great improvements. But it is not known which type of exercise is best for the elderly. To help address this, the traditional fitness group conducted mainly repetitive exercises like cycling or Nordic walking, while the dance group was challenged with something new each week.

Consistently changes in dance routines of different genres were implemented. These included the likes of jazz, square, Latin-American, and line dancing. To help keep the dances more challenging, speed and rhythms were
changed every week to simulate the learning process as the seniors learned new routines.

Improvements were seen all around

Both groups were found to have increases in their hippocampus regions of the brain – an important area prone to age-related decline and affected by neurodegenerative disease such as Alzheimer’s. the hippocampus is also known for playing key roles in memory, learning, and even balance.

It is thought that the extra challenges imposed on the dance group account for much of the observed improvements.
“I believe that everybody would like to live an independent and healthy life, for as long as possible. Physical activity is one of the lifestyle factors that can contribute to this, counteracting several risk factors and slowing down age-related decline. I think dancing is a powerful tool to set new challenges for body and mind, especially in older age.” Said Dr. Rehfeld.

The researchers are currently evaluating a new system that improves physical activity through the use of melodies and rhythm. They call this “Jymmin,” a combination of jamming and gymnastics. By combining the enjoyment of music and physical activity, they hope to help provide an exercise routine that not only improves health, but reduces the risk of dementia.