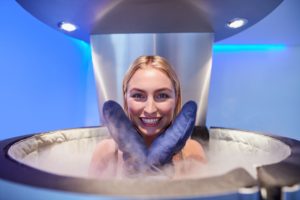 You probably know that icing sore joints can help reduce inflammation and ease pain. Cryotherapy is similar to that, except that the temperature is far colder than a simple ice pack. But could you handle the extremely low temperature if it would relieve your joint pain?

Many famous athletes already use cryotherapy. You stand upright in a chamber where temperatures are between -184 and -256 F. This puts your body in a dying state, causing it to activate receptors of the nervous, immune, and endocrine systems. As a result, all pain is reduced within three minutes.

Bearing extremely cold temperatures isn’t for the faint of heart. In fact, to partake in cryotherapy, you must not be pregnant or have health conditions like hypertension, deep vein thrombosis, acute or recent myocardial infarction, uncontrolled seizures, fever, Raynaud’s syndrome, acute kidney or urinary tract diseases, or open wounds. If you clear that list, cryotherapy may be a good option for you and your pain.

You are provided with gloves, earmuffs, a face mask, socks, and boots before stepping into the ‘human freezer.’

Users of cryotherapy have not only reported a reduction in joint pain, but also a significant boost in mood. Furthermore, some have reported that their exercise performance post-treatment is improved as well.

The preliminary research on cryotherapy that has taken place in Poland suggests that this treatment may help relieve anxiety, depression, and insomnia.

The FDA hasn’t fully approved cryotherapy, as there isn’t much proof of the health claims. But with such a large following, there may be something behind it.

Also read: Avoid these foods if you have joint pain