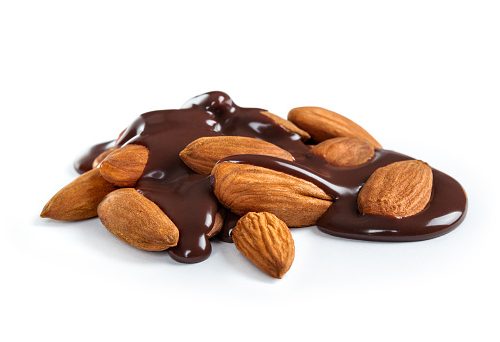 Almonds are known for providing a multitude of health benefits and tasting great. They have been linked to boosting brain health, improving bone health, and even strengthening the immune system.

Now, a new study has found that when almonds are combined with dark chocolate and cocoa, the combination may also reduce a risk factor for coronary heart disease.

It was found that by consuming almonds, either alone or combined with almost a quarter cup of dark chocolate and 2 1/3 tablespoons of cocoa a day may help to significantly reduce the number of LDL in the bloodstream, also known as bad cholesterol. LDL cholesterol has been linked to the clogging of arteries in the heart, leading to heart disease.

However, the researchers warn that the key lies in how much you eat.

“It’s important to put this into context: The message is not that people should go out and eat a lot of chocolate and almonds to lower their LDL. People are allowed to have about 270 discretionary calories a day, and when foods like almonds, dark chocolate, and cocoa are consumed together as a discretionary food, they confer health benefits unlike other discretionary foods such as frosted donuts,” said the study’s lead author Penny Kris-Etherton, Ph.D., a Penn State University distinguished professor of nutrition.

Looking for an effect over time


The researcher’s highlight that almonds were consumed in place of dairy fat as part of a healthy diet. This is important as saturated fats, commonly found in products like butter and cheese, were replaced with unsaturated fats, such as that found in almonds. This would have a positive effect on plasma lipid concentrations.

Eating them together proved beneficial

Results of the study showed that almonds alone lowered cholesterol by seven percent compared to the first period of the study. However, when combining all three foods, the reduction of small, dense LDL particles was also observed.
Eating dark chocolate and cocoa alone didn’t seem to have any major effect on heart health, according to the researchers.

“Cocoa is a plant food with a lot of bioactive components. There might be benefits we don’t even know about… and it’s delicious even without sugar. I would love to see healthy ways to eat cocoa becoming mainstream,” said Kris-Etherton.