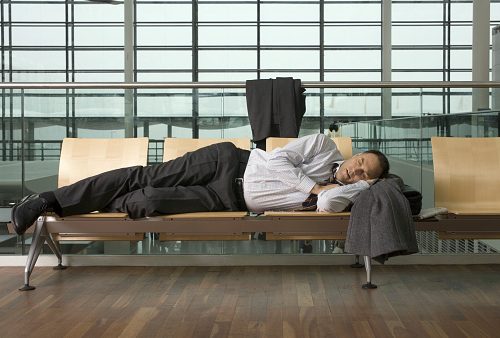 Many of us use the summer as an opportunity to take a vacation—or two. But if you’re crossing over different time zones, you may return from your trip with some serious jet lag.

Jet lag is a condition that causes temporary fatigue, insomnia, and other symptoms as a result of travelling across different time zones. That’s because your natural circadian rhythm, which helps regulate your sleep/wake cycle, becomes disrupted. Although jet lag cannot be prevented, there are some things you can do to reduce its symptoms and get back to feeling like you again, all while restoring your circadian rhythm.

Dr. Alon Avidan from the Sleep Disorders Center at UCLA explained, “Anyone who has ever suffered jet lag knows firsthand that our bodies are persistent in how they keep track of time. During jet lag, a rapid shift in the light-dark cycle temporarily disrupts one’s normal sleep-wake pattern, and our bodies become desynchronized.”

Get rid of that jet lag

The quickest solution that Dr. Avidan shared is to take a low dosage of melatonin and expose yourself to light as much as possible. If traveling west, Avidan suggests taking melatonin during the second part of the night, as it will help you stay asleep and begin to adjust to the time change.

When traveling west, you will want to take in as much light as possible toward the later portions of the night. When going east, maximize your light exposure during the day.
Avidan added, “Adjusting the circadian clock to the new timing of the sleep-wake cycle is strongly dependent on the direction of travel and the number of time zones crossed.”

Another tip is to try and stay awake as much as possible during the flight if it’s light out. This means keeping the window shades up when the sun is out. Even if you’re feeling tired, its best to sync your sleep with natural sunlight.

Other tips that Dr. Avidan suggests to combat jetlag include using sleep aids, getting up early and going to bed earlier days before heading eastbound, and waking up later and going to bed later when travelling westward. Avoid caffeine and alcohol hours prior to bedtime. Avoid heavy meals and eating meals based on the time zone you are visiting and use earplugs and blindfolds to avoid noise and light when trying to regulate your sleep.

By adhering to these tips, you will have greater success in combatting jetlag. You’ll return from your summertime vacation feeling refreshed.

How not to let your stomach ruin your vacation

Jet lag may be a thing of the past: Study