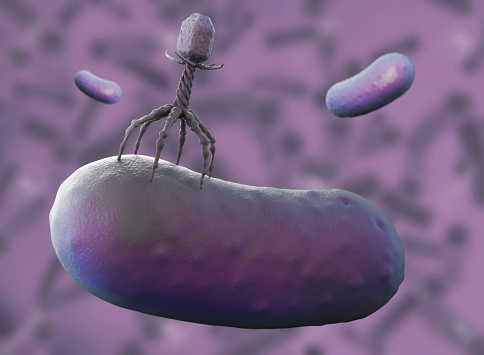 Antibiotic-resistant bacteria have become an increasingly dangerous problem in the medical community. Having a disease that is not adequately treated with medication can lead to prolonged illness and even death. This has led researchers to continually search for alternative methods to combat this prevalent issue, and they believe the use of a “natural method” using bacteriophages—viruses that kill bacteria—might help delay this growing problem.

Bacterial infections can grow out of control in the human body. They can enter the bloodstream and infect vital organs. While we do have a defense in the form of our immune system, it can actually become excessively damaged during the fight against bacteria, leading to further tissue damage, organ failure, and death. One such serious infection is called sepsis, where an increasing number of causative bacteria are becoming resistant to antibiotics.

The researchers set out to investigate the possibility of effectively using bacteriophages to kill 12 strains of antibiotic-resistant bacteria isolated in patients. This was not a new idea, as it was previously proposed by Felix d’Herelle, a French-Canadian microbiologist in 1926.

By isolating phages found in birds and dogs, the researchers determined that no single phage would kill all 12 strains. But they did find that a combination of two or three phages would be able to kill them, as demonstrated in cultures in the lab. These were positive results that prompted the researchers to move on to animal models to find a treatment for sepsis. The initial results in mice receiving antibiotic resistant bacteria did not show any sign of disease, however, when the mice were given chemotherapy—effectively knocking out the immune system, replicating actual events in cancer therapy patients—the researchers saw that bacteria moved from their intestine to major organs—leading to a fatal sepsis-like infection. The researchers then tested to see if phages were able to control this infection.
“When the phages are delivered into the animals, their efficacy in reducing the levels of bacteria and improving health is dramatic,” said Anthony Maresso, associate professor of molecular virology and microbiology at Baylor College of Medicine. “But that is not what is truly remarkable,” he continued. “What is remarkable is that these ‘drugs’ were discovered, isolated, identified, and tested in a matter of weeks, and for less money than most of us probably spend in a month on groceries.”

Another advantage that phages have is their ability to evolve, which can be simulated in a lab in a matter of days. This is in direct contrast to antibiotics, which are essentially chemicals, and cannot change in real time. Years may be needed to develop new antibiotics, with the cost running up into the billions.

While this is a positive development in the fight against antibiotic-resistant bacteria, the researchers caution that phages are not foolproof treatments, as our own immune system has the ability to nullify their effects. However, this study provides evidence that phages can be a potential source of benefit in medicinal treatments and should be given more attention.