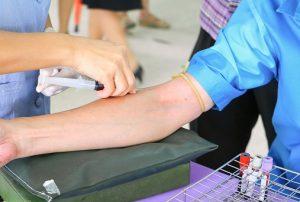 The term collapsed veins can sound frightening, and while there are complications associated with the condition, there are also treatment options.

When an injury occurs repeatedly to the veins, the internal lining of the veins can swell and collapse. Thankfully, when the swelling goes away, blood circulation goes back to normal and the vein recovers. So even though “collapse” has an air of finality to it, when patients ask—do collapsed veins heal?—doctors will tell them that it is possible. The bottom line is that the veins need time to recover.

Collapsed vein causes are often associated with chronic trauma from intravenous injections. When this happens, in the majority of cases, the veins are temporarily not functional. However, permanent collapse can occur. Below is a list of causes for permanently collapsed veins:

There are some typical collapsed vein symptoms, including pain following tissue damage, discoloration of the skin, a cold feeling in the hands and feet caused by obstructed blood flow, tingling sensations in the hands and feet, and itching. In most cases, the itching is a sign that healing has begun.

The complications linked to collapsed veins are mainly associated with circulation. Sometimes, collapsed veins lead to the formation of smaller veins, which don’t allow for sufficient blood flow. This poor circulation can increase the risk of stroke, cardiovascular problems, and kidney disease. It can also cause cyanosis, which is a bluish discoloration of the skin as a result of inadequate oxygenation of the blood.

While the body has a natural way of adapting whereby it replaces the damaged veins with smaller veins, these small veins can’t be used to perform future intravenous injections.

Collapsed vein treatment is based on common sense approaches. For instance, if you stop injections into the vein to prevent further damage, you will also be allowing it the time it needs to heal. People have benefited from vitamin supplements that help promote faster healing of the vein. Inflammation associated with collapsed veins has been known to be treated with vitamin C and rutin, a citrus flavonoid that can be found in oranges, limes, grapefruit, broccoli, red bell peppers, and Brussels sprouts. Nutritionists suggest that foods rich in bioflavonoids are also good when it comes to improving general vein health. Examples of bioflavonoid foods include pineapple, papaya, mango, beet, red cabbage, onion, and spinach.


Unfortunately, some people who have vascular disease. These individuals should consider compression stockings and leg elevation. When there is permanent collapse of the veins, there is no going back, but again, the formation of new, smaller veins can happen. It is very important to allow an injection site to rest to allow for the formation of these new blood vessels.

There are certain areas of the body where vein injection should be avoided. For instance, veins in the hands are small and can collapse easily. Also, the groin area should be avoided since there is a higher risk of circulation being affected. It is also important to keep in mind that if a site appears bruised or swollen, you should not inject in the area.

An injection area should always be disinfected to reduce the risk of dirt or debris and tourniquets shouldn’t be tied too tight because they can cause the vein to collapse.

In cases where drug abuse is an issue, getting help is important, not only to prevent permanent collapse but to avoid serious, life-threatening complications. There are special rehabilitation centers that people in this position can look to.