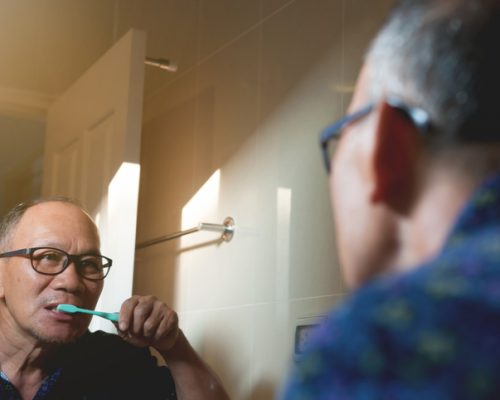 Cognitive decline in older adults may be slowed with better oral hygiene and regular dental visits. The researchers reviewed data from cross-sectional and longitudinal studies conducted between 1993 and 2013.

Some studies found that oral health measures like the number of teeth, the number of cavities, and the presence of periodontal disease were associated with a higher risk of cognitive decline or dementia.

Dr. Bei Wu, lead researcher, explained, “There is not enough evidence to date to conclude that a causal association exists between cognitive function and oral health. For future research, we recommend that investigators gather data from larger and more population representative samples, use standard cognitive assessments and oral health measures, and use more sophisticated data analyses.”

Alzheimer’s disease patients with gum disease (periodontitis) show higher rates of cognitive decline. The researchers from University of Southampton and King’s College London found that periodontitis, a common ailment older people, can become even more prevalent among those with Alzheimer’s due to lagging oral hygiene, as patients start forgetting to take care of their oral health. Higher levels of antibodies to periodontal bacteria increase inflammation throughout the body, raising the risk of dementia.

The study included 59 participants with mild to moderate Alzheimer’s disease. Their blood samples were assessed to measure inflammatory markers. Dental health was also examined, and 52 participants went for a follow-up six months later.

Senior author Clive Holmes said, “These are very interesting results which build on previous work we have done that shows that chronic inflammatory conditions have a detrimental effect on disease progression in people with Alzheimer’s disease. Our study was small and lasted for six months, so further trials need to be carried out to develop these results. However, if there is a direct relationship between periodontitis and cognitive decline, as this current study suggests, then treatment of gum disease might be a possible treatment option for Alzheimer’s.”

“A number of studies have shown that having few teeth, possibly as a consequence of earlier gum disease, is associated with a greater risk of developing dementia. We also believe, based on various research findings that the presence of teeth with active gum disease results in higher body-wide levels of the sorts of inflammatory molecules, which have also been associated with an elevated risk of other outcomes, such as cognitive decline or cardiovascular disease. Research has suggested that effective gum treatment can reduce the levels of these molecules closer to that seen in a healthy state.”

“Previous studies have also shown that patients with Alzheimer’s disease have poorer dental health than others of similar age and that the more severe the dementia the worse the dental health, most likely reflecting greater difficulties with taking care of oneself as dementia becomes more severe,” Dr. Ide concluded.

Although there is no cure for cognitive decline or dementia, there are ways to protect your brain and preserve your memory.