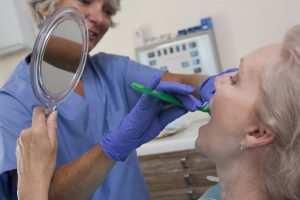 The study included 59 participants with mild to moderate Alzheimer’s disease. Their blood samples were assessed to measure inflammatory markers. Dental health was also examined, and 52 participants went for a follow-up six months later.

Senior author Clive Holmes said, “These are very interesting results which build on previous work we have done that shows that chronic inflammatory conditions have a detrimental effect on disease progression in people with Alzheimer’s disease. Our study was small and lasted for six months so further trials need to be carried out to develop these results. However, if there is a direct relationship between periodontitis and cognitive decline, as this current study suggests, then treatment of gum disease might be a possible treatment option for Alzheimer’s.”

“A number of studies have shown that having few teeth, possibly as a consequence of earlier gum disease, is associated with a greater risk of developing dementia. We also believe, based on various research findings, that the presence of teeth with active gum disease results in higher body-wide levels of the sorts of inflammatory molecules, which have also been associated with an elevated risk of other outcomes, such as cognitive decline or cardiovascular disease. Research has suggested that effective gum treatment can reduce the levels of these molecules closer to that seen in a healthy state.”

“Previous studies have also shown that patients with Alzheimer’s disease have poorer dental health than others of similar age and that the more severe the dementia the worse the dental health, most likely reflecting greater difficulties with taking care of oneself as dementia becomes more severe,” Dr. Ide concluded.

In dementia and Alzheimer’s disease, patients are getting progressively forgetful. Remembering to brush and floss becomes a greater challenge as the disease worsens. It’s important to still maintain proper oral hygiene as it can have negative consequences on overall health. Here are some tips to keep good oral hygiene with dementia.

Some indications of oral health tissues in Alzheimer’s patients include refusal to eat – especially hard or cold food, frequent pulling at the face or mouth, leaving dentures out of their mouth, increased restlessness, moaning, or shouting, disturbed sleep, refusal to take part in activities, and aggressive behavior.

Spotting oral hygiene problems early on can help reduce the risk of complications and worsening of dementia.