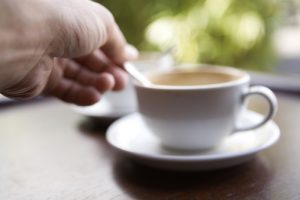 Mornings are often the hardest part of our day. We feel groggy, irritated, and dread speaking to anyone before we get our first cup of coffee. Getting that daily dose of caffeine not only makes us more alert but has proven to provide many health benefits as well. Prior research has linked coffee consumption to the reduction of Parkinson’s risk, diabetes, and now, to reducing liver cancer risk.

New research conducted at the University of Edinburgh found that coffee drinkers have greater protection from hepatocellular cancer (HCC), also known as liver cancer. Interestingly, the more coffee consumed, the greater the protective effect. HCC is the second leading cause of death globally and is considered to have a poor prognosis. It has a higher chance of developing in those already suffering from chronic liver disease.

The researchers note that protection was seen in both new and old coffee drinkers. While little data was gathered on the effects of drinking more than five cups of coffee a day, drinking more coffee seemed to have a greater protective effect.

“Coffee is widely believed to possess a range of health benefits, and these latest findings suggest it could have a significant effect on liver cancer risk,” said lead author Dr. Oliver Kennedy of the University of Southampton.

Coffee is a super food

The observed effect is thought to be attributed to antioxidants, anti-inflammatories, anti-carcinogenic, and other compounds that coffee possesses.
While this is yet another positive reason to add coffee to your daily routine, the researchers do not suggest that people drink more than five cups of coffee at day. Caffeine, the main ingredient that helps us feel more alert, can also bring with it unwanted side effects such as insomnia, restlessness, and stomach irritation.

More investigation is needed into the potential harms of high caffeine intake though coffee and its effects, the researchers add.

“We have shown that coffee reduces cirrhosis and also liver cancer in a dose-dependent manner. Coffee has also been reported to reduce the risk of death from many other causes. Our research adds to the evidence that, in moderation, coffee can be a wonderful natural medicine,” said Professor Peter Hayes of the University of Edinburgh.

The research team’s next step is to test the effectiveness of caffeinated coffee though randomized trials with those who are at risk for liver cancer.