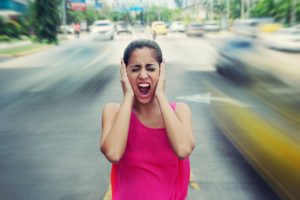 While these results suggest that there is a connection between city noise and hearing loss, researchers assert that it does not mean that noise pollution is the main force that causes hearing degradation. Henrik Matthies, the managing director of Mimi Hearing Technologies referred to these results as “robust” and stated: “The fact that noise pollution and hearing loss have such a tight correlation points to an intricate relationship.”

The connection was found by comparing data from two databases. The first database used information from the World Health Organization and a technology research group based in Norway called SINTEF in order to create a noise pollution ranking scale for cities worldwide. The second contained hearing loss data gathered by Mimi though their cellphone-based hearing test. In comparing the data, it was found that individuals who lived in the loudest cities were on average ten years older in terms of their hearing ability.
Researchers assert that these results emphasize the need for better monitoring of hearing conditions. Manfred Gross, the head of the department of Audiology and Phoniatrics at Charite University Hospital, commented: “While eye and sight checks are routine, ear and hearing exams are not. The earlier hearing loss is detected, the better the chances are for preventing further damage.” This study demonstrates that hearing loss is a much more widespread epidemic than many realize and highlights the need for regular hearing checkups in order to prevent any damage from worsening.