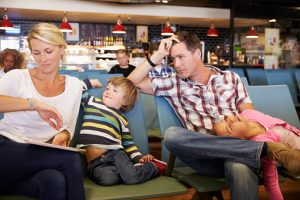 This trend is a result of poor policies implemented in the workplace with regards to work schedule flexibility, sick days or vacation time, and maternity leave.

Researcher Matthew Andersson said, “The United States, without any standard paid leave available to mothers or parents — or any standard vacation or sick leave to support raising a dependent child — falls strikingly behind all the other countries we examined in terms of providing for parents’ happiness and overall well-being.”
The researchers found that countries with government-mandated paid leave policies have a smaller happiness gap between parents and childless couples. The researchers reported that parents in countries with such implemented policies may actually be slightly happier.

The researchers added, “Another striking finding was that giving money to parents in child allowances or monthly payments had less effect on parental happiness than giving them the tools such as flexible work time.”

The researchers suggest subsidized child care could lead to improvements and reduce the ‘happiness gap’.

The findings were published in the American Journal of Sociology.