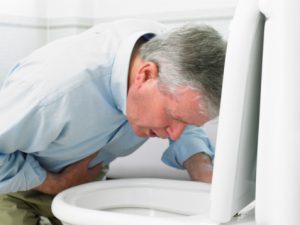 Our stomachs are filled with acid so corrosive that if it were to be placed on a wooden table, it would eat through it. Thankfully, however, our bodies are advanced enough to account for this potential danger, creating a protective mucus lining that covers the inside of the stomach. This gastric acid is only one component of the fluids required for adequate food digestion, as another fluid made in the liver and stored in the gallbladder is required as well.

This fluid is called bile, a digestive fluid produced by the liver that helps you easily digest and absorb fats. Under normal conditions, bile stays in the gallbladder and is released into the small intestine once it senses fatty food has been eaten. Gastric juices in the stomach are normally held a bay by gastric sphincters located at the lower esophagus (lower esophageal sphincter), and near the entrance of the small intestine (pyloric sphincter). Bile is never found in the stomach during normal circumstances, but if a condition were to occur that resulted in the pyloric sphincter opening abnormally—allowing food from the small intestine and the stomach to mix—it can result in a gastric fluid combination that appears yellow, especially when vomited.

Causes of throwing up yellow

Knowing the reasons behind how and why something happens is half the battle. Throwing up yellow fluid over a long period of time may signify a serious problem that should be addressed by a doctor right away. The fact that excessive vomiting is occurring in itself puts one at risk for dehydration and electrolyte imbalances, which can be life threatening. It is important to recognize that not all vomiting is dangerous, as it is a common reflex that may be triggered due to irritation or even a viral infection—this doesn’t mean that it is ok to neglect such symptoms. The following are various reasons why you may vomit yellow bitter liquid.

Yellow colored foods: It may be that you have an excessive amount of yellow colored foods in your diet If you were to vomit, the food debris in the stomach will cause it to take the color of anything that was previously residing in it. Common foods that can cause this include corn and carrots. This is not a serious concern.

Bile reflux: Occurs when there are excessive amounts of bile in the stomach and the body tries to get rid of it, resulting in bile being vomited. Peptic ulcers and stomach surgery such as gallstone removal may be the main causes of this disorder. Typical symptoms include abdominal discomfort, heartburn, nausea, or hoarseness. This condition needs the attention of a medical professional. This may result in one throwing up yellow bile every morning.

Intestinal blockage: As the name suggests, this results in the blockage of the intestinal tract (normally caused by a twisted intestine). This can be a very dangerous condition if not treated immediately. The condition causes food to move in the opposite direction and induce vomiting. It is most commonly seen as a birth defect that requires surgery.

Respiratory inflammation: Infections of the respiratory tract can result in the vomiting of yellow bile and occur due to the infection producing large amounts of mucus. This mucus harbors bacteria and other infectious microbes that travel down the throat and pollute the stomach. This fluid continually accumulates inside the digestive system, nauseating the person affected until they begin expelling yellow bile, rich in mucus. By treating the respiratory infection—cold or flu—the vomiting of yellow bile will go away.

Pyloric valve malfunction: Often occurring in the elderly, this condition can result in throwing up yellow bile due to pyloric sphincter malfunction. During normal digestion, bile is released into the small intestine to aid in the breakdown of fats. The pyloric sphincter is an opening that separates this portion of the small intestine from the contents of the stomach. In cases where this sphincter does not close properly, bile can enter the stomach, combining with the stomach acid. This can lead to abnormalities such as heartburn, pain, and the throwing up of yellow bile. It is advised to see a medical professional for immediate consultation if this condition is suspected.

How to stop throwing up bile?

Serious conditions should always be taken care of by the expertise of a highly trained medical professional. However, there are some things you can do to prevent developing some causes of bile vomit and even alleviate it to a degree. The following are some tips you can do right now.

Avoid smoking and drinking: Smoking cigarettes dries the mucous membranes and saliva that are essential in cushioning and guarding the windpipe, potentially leading to bile vomiting. Drinking alcohol may irritate the esophagus and relax the lower esophageal sphincter, creating the ideal environment for reflux and subsequent vomiting bile to occur. Throwing up bile after drinking in excess is also a common occurrence.

Small frequent meals: This may lessen the pressure on the intestine. Meals that are large may pressurize the digestive system into working hard to digest and therefore the pyloric valve may dysfunction leading to bile reflux.

Limit fat consumption: Limiting fat in the diet will lessen the need for bile production.

Lose weight: Excess weight seen in obese individuals has been linked to putting undue pressure on the stomach and internal organs. Losing weight will aid in the reduction of acid reflux in this regard, and it some cases even cure it.

Yellow dock: A herb that is known for its many medicinal properties. It’s ideal for controlling bile and other digestion related disorders by reducing stomach acid.

What to eat after throwing up yellow bile?

Throwing up yellow bile causes dehydration, in fact, this is a common trait of vomiting in general. It is therefore advised to stay hydrated regardless if you feel you are unable to keep anything down in your stomach. You can accomplish this by taking small sips of water. Replacing lost electrolytes is also of vital importance and drinking something sweet such as fruit juice can aid in getting sugar back into the system. Likewise, eating salty crackers can help bring your sodium levels back up to normal levels. Consuming ginger in the form of soda or tea may also aid in relieving nausea and vomiting symptoms.

Although the cause of yellow vomit can be complex, the symptom of vomiting is often treated the same way. For minor cases, this usually mean to simply replace what was lost: water and electrolytes. But in more severe cases, it is best to see a doctor right away.