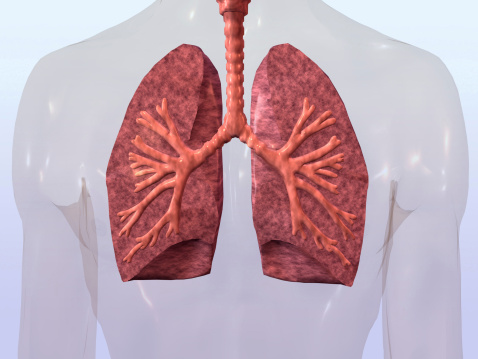 Pulmonary infarction is defined as the death of one or more segments of the lung tissue due to a lack of blood supply. This dead tissue is known as a pulmonary infarct. The decreased or deficiency in blood flow is usually caused by an obstruction in a blood vessel serving the lung. This obstruction may manifest itself as a blood clot or air bubbles in the bloodstream known as an embolism. This blockage could also be caused by a clot formed in the blood vessel itself and remains at its formation site (thrombus). People with healthy lungs generally survive these blockages, as the blood reaches its destination through alternative routes. However, someone with unhealthy, infected, or congested lungs are more likely to suffer from lung infarctions following the blockage of a blood vessel. These infarcts take two or three weeks to heal, where the dead tissue is replaced by scar tissue.

What are the causes and symptoms of pulmonary infarction?

On a grand scale, the most common cause of pulmonary infarction is a blood clot that travels to the lung known as a pulmonary embolism. However, there are other medical conditions that can cause this issue: cancer, autoimmune diseases like lupus, sickle cell disease, infections, and lung diseases like amyloidosis are some examples. Despite these many causes, pulmonary infarction is rare, as the lung tissue has three sources to gather oxygen: the pulmonary artery, bronchial artery, and the alveoli themselves. This has led specialists to observe that pulmonary infarctions are more common in people who have a significant underlying lung disease (e.g. chronic obstructive pulmonary disease).

The symptoms of pulmonary infarction are variable but are generally accompanied by the coughing up of blood (hemoptysis), fever, shortness of breath (dyspnea), and chest pain in the area of the issue when breathing in (pleurisy). For some people, pulmonary infarction will not present any symptoms at all. In fact, the condition is sometimes diagnosed as an incidental finding when a mass is seen on a routine chest x-ray. The first signs a patient may experience include exertion from getting out of bed, straining, or changing position. They may feel apprehensive and suffer from any of the following symptoms:

How to diagnose and treat pulmonary infarction

There are several different tests doctors can use to diagnose pulmonary infraction. These include arterial or capillary blood gas, D-dimer test, blood tests, chest x-ray, CT chest scan, CT pulmonary angiography, ventilation/perfusion scan, MRI, and echocardiography. Plain radiographs are also used, and in these tests, the findings include a wedge-shaped hump without air bronchograms in the lower lobes. The CT scan would reveal the same shapes as well as convex borders with a halo sign, among others.

The most nearly definitive method of diagnosis available is pulmonary angiography, and it is being used with increasing frequency, efficiency, and safety. The procedure does pose certain dangers and should not be used indiscriminately, but it is very helpful in select patients, especially those under consideration for pulmonary embolectomy. Angiography helps to confirm the diagnosis of pulmonary embolism and identify the extent and location of the emboli, which is vital information if a surgical operation needs to be performed.

People who need pulmonary infarction treatment will be provided with supportive care and management of the underlying condition. The supportive care aspect includes maintaining enough blood oxygenation by administering it and controlling pain to reduce discomfort when breathing. If the blood oxygen isn’t enough, the patient may need to be intubated and provided with a ventilator. Each case may require additional or alternative treatment, but aggressive treatment must be given to people who have sickle cell crises or infections. If cancer is the cause, specific treatment options would need to be assessed. However, if the main cause is pulmonary embolus, the treatment would include the institution of anticoagulant medication, followed by a few days by an oral anticoagulant. If the cause is more severe, fibrinolytic drugs may need to be administered to dissolve the clot that is blocking the blood flow.

Related: What is renal infarction? Causes, symptoms, and treatment tips