Home » Eye Health » What causes mucus in eye (eye discharge) and how to get rid of it? 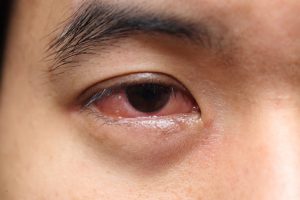 Eye discharge (eye mucus) is a combination of oil, mucus, skin cells, and other debris accumulating at the corners of your eyes during sleep. Sometimes it can be wet and sticky, and at other times it may be dry and crusty.

Although eye discharge may gross you out and be annoying to clean every morning, it actually has a protective function, removing waste products and potentially harmful debris from the tear ducts.

Eye discharge is formed while you’re asleep because, during the day, frequent blinking bathes the eyes, preventing the mucus from accumulating. When we sleep, we do not blink, so the mucus piles up.

A small amount of eye discharge upon awakening is normal, but excessive mucus or a weird color—yellow or green—could indicate a serious eye problem.

Causes of mucus in the eye

The primary cause of eye mucus is the accumulation of oil, debris, and mucus while you sleep. Other causes for mucus in the eye include:

Generally speaking, having mucus in your eyes isn’t a cause for alarm, as your body is simply trying to protect itself, most likely for a foreign invader such as bacteria or viruses. Making note of the color, consistency, and amount of discharge can provide clues to help you decipher the possible causes of your particular type of infection or any other reason you may be experiencing this symptom. When in doubt, see your doctor to get an expert opinion.

Gray or thick green eye mucus: This may indicate an eye infection possibly caused by bacteria. Bacterial conjunctivitis is an eye infection that makes it difficult to open the eyes in the morning due to pus production by the bacterial infection. Irritation and redness may also be seen. See a doctor if you suspect any serious complication as a result of this symptom

Small, dry particles of eye mucus: May be caused by allergic conjunctivitis, affecting the eyelid lining and white portion of the eyes (conjunctiva). It is often caused by allergens such as mold, dander, pollen, and other substances. Allergies are caused by a reaction in the body that causes histamine to be released, leading to swelling and itching. Tearing, redness, and puffy eyelids may also be seen. Seek medical attention if over-the-counter treatments are not effective.

Thick, crusty eye mucus: May be caused by viral conjunctivitis. Other possible causes include bacterial infections such as chlamydia or gonorrhea, allergic reactions or irritants such as dust, pool chlorine, smoke, and shampoos. Some people may notice an increased sensitivity to light, redness in the eye lining, and increased tearing. Seek medical attention if these symptoms don’t disappear.
Watery eye mucus: Caused by a stye, which is a tiny lump found inside or outside of the eyelid. Styes are painful and are often filled with puss. They are due to an infection by staphylococcus bacteria. Seek the aid of a medical professional if pain and swelling have not subsided after a couple of weeks, or if the stye interferes with sight.

White, stringy eye: Caused by dacryocystitis which is the inflammation of the tear sac. Acute infections have swelling and pain, while chronic infections have excessive tear production and persistent redness. Seek medical attention to get proper treatment.

Here are some home remedies to try:

Generally, a small amount of eye discharge is normal and only requires you to wash your face to remove it. If you begin to notice changes to your eye discharge, such as changes in color or amount produced, see your doctor, as it could indicate an infection.