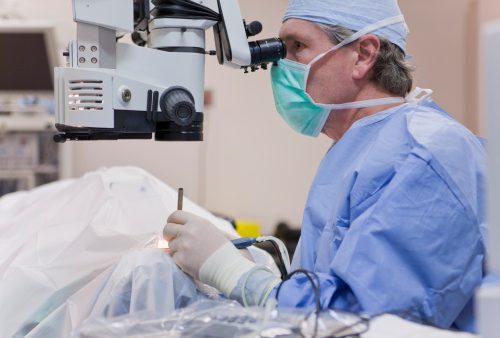 Cataracts and Alzheimer’s disease have been found to be linked to a common gene. Both conditions arise with age, but the latest findings now add further evidence to a genetic link, too.

The researchers looked at the brain MRIs of the participants in the Framingham Offspring Eye Study cohort. The researchers found a strong correlation between cortical cataract and Alzheimer’s disease-related brain degeneration. Particularly impacted was the volume of the temporal horn, a part of the brain which is commonly enlarged in Alzheimer’s disease. Cortical cataract was also associated with poorer performance on cognitive tests.

A genome-wide association study was also conducted looking at nearly 190,000 single-nucleotide polymorphisms (SNPs), or DNA sequence variations. The researchers uncovered three specific intronic SNPs in the gene coding of a protein essential in cell adherence and formation of connective structures.

Senior author Lindsay A. Farrer said, “Though much work remains to be done, a link between cataracts and Alzheimer’s disease supports the idea of a systemic, rather than brain-limited, focus for processes leading to Alzheimer’s disease. This study gives hope that we are moving toward earlier diagnosis and new treatment targets for this debilitating disease.”

An alternative study uncovered that undergoing cataract surgery may ease Alzheimer’s disease symptoms. Lead author of the study Dr. Brigitte Girard said, “We wanted to learn whether significant vision improvement would result in positive mood and behavior changes, or might instead upset these patients’ fragile coping strategies.”

The researchers enrolled 38 men and women with mild Alzheimer’s disease, all with cataracts in at least one eye. The participants underwent cataract surgery and all of them reported great improvement in their vision.

Psychological and cognitive health was also tested one month after the surgery and again three months later. One in four patients showed improvements in cognitive ability and memory, and even in depressive symptoms. On the other hand, the patients did not show any improvements in their daily functioning.

Sleep was also found to be improved after surgery, meaning, cataract surgery can aid in melatonin levels.

Dr. Girard concluded, “In future studies, we intend to learn what factors, specifically, led to the positive effects we found, so that we can boost the quality of life for Alzheimer’s patients, their families, and caregivers.”

Cataract surgery: Tips to a speedy and safe recovery