Home » Health News » Can Your Eyes Reveal Your Alzheimer’s Risk? 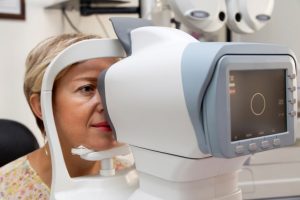 It is often said that the eyes are the window to the soul, but they may also be the window to brain health. American researchers may have uncovered a new eye test that reveals a person’s Alzheimer’s risk, even before symptoms are experienced.

It can take up to two decades for symptoms related to Alzheimer’s disease and dementia to show up, so detecting these diseases early on can help patients receive early treatment, which may delay the onset of the brain disease. Current methods for early detection of Alzheimer’s disease include a spinal tap or PET scan, which can be quite invasive.

The eye exams used contained much of the technology commonly found in current ophthalmologist offices. The eye examination found that among those 17 participants who were determined to be at risk for Alzheimer’s disease, they also had thinner retinas along with fewer blood vessels in the retinas compared to other participants. This means that less blood could reach the eyes.

Co-author of the study Dr. Rajendra S. Apte added, “What we wanted to examine was whether we could use the eye as a window to the brain. The finding that there were abnormalities in the blood vessels in the eye so early in disease was very surprising. So, this tells us that there are things going on very early in disease that we should be looking for even in the brain.”

Van Stavern continued, “Since these pathologic changes in Alzheimer’s disease begin about 20 years before dementia develops, it means practically by the time someone develops dementia there is so much loss of neural tissue that the medications, the treatments are not very effective. There’s a push now to start intervening early in the preclinical stage with medications… So, the idea would be using a test like this, which is non-invasive, as a way of screening people who might be at risk for Alzheimer’s disease.”

There is currently a Canadian-based company who has developed another test somewhat different from the retina examination test which may also be effective in early diagnosis of Alzheimer’s disease. Clinical trials are currently underway, and the company is looking to seek approval of their test by 2019.

There is currently no cure for Alzheimer’s disease and dementia, but treatment given early on may delay severity and onset giving patients many more years with their memories.