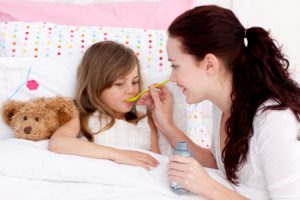 Bronchiolitis – inflammation of the bronchioles – in early childhood has been found to increase the risk of adult asthma. Bronchiolitis is a lung infection commonly experienced by children. It leads to congestion of the small airways (bronchioles) in the lungs.

Bronchiolitis can occur year-round, but is often worse in the winter months.

Bronchiolitis can begin similar to a cold, but cold-like symptoms can progress to coughing and wheezing and can even make breathing more difficult.

Symptoms of bronchiolitis can last for days, weeks or even months, but with proper care children can get better and will not require hospitalization.

Early childhood bronchiolitis can increase the risk of asthma in adulthood 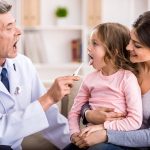 Researchers found that children who experience bronchiolitis have a higher risk of developing asthma in adulthood. Bronchiolitis has been linked with asthma, COPD and lung disorders in adulthood. Much of the research that has linked childhood lower respiratory infections has been done in retrospective studies.

For the study, data was collected between 1981 and 1982 from 83 children diagnosed with bronchiolitis – the children were all younger than two years. Forty-eight of the patients were followed up with in 2010 when they were between the ages of 28 and 31. Saint George’s Respiratory Questionnaire (SGRQ) was used to assess quality of life. Participants also underwent medical examinations.

Asthma was diagnosed in 31 percent of those in the bronchiolitis group; lung function was found to be weaker in this group as well.

The findings also revealed that changes in lung function reveal irreversible airway obstruction in those with bronchiolitis, which also signals an increased risk of COPD.

The findings were published in Respiratory Medicine, Pediatric Pulmonology, Acta Paediatrica, and Pediatric Allergy and Immunology.


Bronchiolitis not to be confused with bronchitis

In bronchitis inflammation can occur from a slew of factors, including environmental factors, infection or allergies. Bronchiolitis, on the other hand, is more similar to pneumonia, so the cause of bronchiolitis is a mixture of pneumonia and obstructive airway disease.

Causes and symptoms of bronchiolitis

Bronchiolitis can be caused by influenza, respiratory syncytial virus (RSV), parainfluenza and other viruses. When bronchiolitis is caused by RSV, wheezing often accompanies the illness.

Symptoms and signs of bronchiolitis include:

Treatment and prevention of bronchiolitis

In order to prevent your child from developing bronchiolitis, follow the below tips.

As for treatment, there are numerous options depending on the severity of bronchiolitis. Treatment for bronchiolitis includes:

Patients with COPD or chronic bronchitis can obtain relief from their conditions with a new device called Aerobika® made from Trudell Medical International. COPD and chronic bronchitis symptoms can worsen in the winter months, leaving patients breathless. Continue reading…

Emphysema and chronic bronchitis are two forms of chronic obstructive pulmonary disease (COPD). Both conditions are life-long and lead to permanent lung complications, which leads to difficulties with breathing. Continue reading…