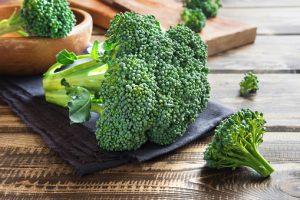 As children, our parents have most likely said to us, “eat your vegetables!” This often results in a steadfast defiance of such an order, likely leading to a crying fit when we haven’t complied. Perhaps one of the most detested vegetables on our plate has to be broccoli, a tree-like plant that would make any child gag at the mere sight of it, but one that is known for being one of the most nutritious.

Once we mature, this is when we realize the importance vegetables have in our diet. They provide the necessary vitamins and nutrients required for optimal health. But vegetables may soon be emphasized even more for promoting our longevity, as a new study finds that they can be used to target and kill colorectal cancer cells.

One of the most common cancers worldwide

Colorectal cancer is the second leading cause of cancer death in males and females in the United States. Globally, colorectal cancer affects nearly one million people every year and accounts for about 715,000 deaths as of 2010; up from the reported 490,000 in 1990.

A team of researchers has found that by creating a cocktail of probiotic bacteria and a broccoli extract, they have produced a potent anticancer agent. But how they achieved this is what makes it interesting.

Using genetic techniques, the research team engineered a form of bacteria commonly found in the gut into a probiotic. This bacterium would then travel to the surface of colorectal cancer cells, which would then secrete an enzyme derived from vegetables, killing the cancer.

Normal cells are unable to perform this enzyme conversion, so they’re not affected by the cell-killing toxin. The research team’s developed anticancer agent should only target colorectal cancer cells.

The developed probiotic with broccoli extract was found to kill more than 95 percent of colorectal cancer cells during laboratory studies. Unfortunately, a similar effect was not seen when testing its effect on cells found in breast and stomach cancer.


Testing the probiotic combination on mice

When testing the engineered probiotic cocktail on mouse models, tumor numbers of colorectal cancer were reduced up to 75 percent. Additionally, these tumors were found to be three times smaller when compared to mice not fed the mixture.

“One exciting aspect of our strategy is that it just capitalizes on our lifestyle, potentially transforming our normal diet into a sustainable, low-cost therapeutic regimen. We hope that our strategy can be a useful complement to current cancer therapies,” said Matthew Chang, an associate professor at the National University Hospital, National University of Singapore (NUS).

While more research would still be needed, the researchers are confident that these types of probiotics could one day be used as a method of prevention as well as helping to clean up remain cancer cells after cancer removal.

Related: What to eat: Broccoli vs. cauliflower