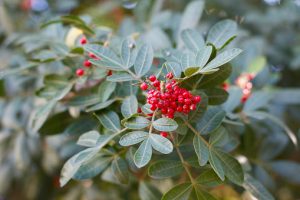 Scientists at Emory University have found an extract capable of neutralizing antibiotic-resistant staph bacteria within the berries of the Brazilian peppertree. This plant is a weed found commonly in warm climates, including U.S. states like Florida, Alabama, Georgia, Texas, and California, though it is native to South America.

The Brazilian peppertree has been used in traditional South American medicine to treat infections within the skin and soft tissue for centuries, and researchers have now found the medicinal mechanism within the berries that make it effective.

The compound discovered was tested on mice infected with methicillin-resistant Staphylococcus aureus (MRSA), and was found to prevent the development of skin lesions. Rather than kill the bacteria, the extract instead represses a gene that allows communication between the bacteria cells. This blockage prevents the bacteria from taking collective action, known as quorum quenching, and allows the immune system to fight the cells effectively.

Assistant professor Cassandra Quave explained, “It essentially disarms the MRSA bacteria, preventing it from excreting the toxins it uses as weapons to damage tissues. The body’s normal immune system then stands a better chance at healing a wound.”

Traditional antibiotics function by attempting to kill the bacteria, though they can add to the growing issue of antibiotic-resistant bacteria—sometimes stronger bacteria can survive the drug and go on to create “superbugs” with stronger resistance to medications.

In contrast, the extract from the Brazilian peppertree interferes with the communication between bacteria, preventing organized action and allowing the body to eradicate them using its natural immunity. Researchers also found that the use of this compound did not have adverse side effects on the skin tissues of the mice, or on the healthy bacteria normally found on the skin.
These results are promising, and Quave and her team are planning to conduct pre-clinical trials to determine the safest and best use of this plant extract. She stated, “If the pre-clinical trials are successful, we will apply for an application to pursue clinical trials under the Food and Drug Administration’s botanical drug pathway.”

The easy accessibility of the Brazilian peppertree combined with these encouraging results could lead to the development of effective treatments for antibiotic-resistant bacteria that cause infection—an issue that the causes 700,000 deaths globally each year, according to the United Nations.