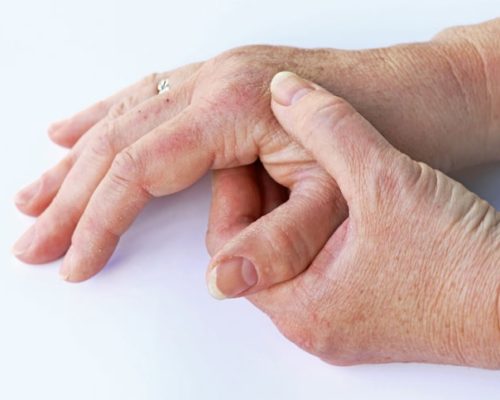 The long-term effects of this immune response on the bones and joints affected by the uric acid crystals are still unclear, which is why a new study examined the presence of bone erosion in gout patients.

The researchers used ultrasounds to determine the extent of bone erosion in 980 patients suffering from gout. They calculated the prevalence and distribution of the erosion in the participants where it was present in order to understand further the factors influencing bone erosion in this population.

Around 79 percent of the patients with bone erosion had it in this area, which significantly differentiates gout patients from patients with rheumatoid arthritis, who most often suffer from bone erosion in the metacarpophalangeal joints (those connecting the finger bones to the hand bones).

The researchers noted that age, length of time a patient suffered from gout, the number of tophi present (uric acid crystals), joint effusion (increased fluid in a joint), and synovial hypertrophy (inflammation and thickening of the inner lining of the joint) all contributed to the formation of bone erosion in gout patients. Of all the patients with bone erosion, 51.5 percent had a single site of erosion, 32 percent had two erosion sites, and 6.7 percent had three.

They also found that the longer a patient suffered from gout, the more likely they were to have bone erosion. The factor with the most significant effect on bone erosion was the number of tophi a patient had, with the risk of bone erosion rising the more tophi were present.

The researchers concluded, “This study has shown that bone erosion is a common complication of gout. Age, duration of gout, tophi, synovial joint effusion were independently associated with bone erosion, shedding further light on the links between crystal deposition and joint damage in patients with gout.

These results suggest that an early diagnosis of gout, controlling the urate level and decreasing local urate crystal deposition may be the most effective way to prevent bone erosion in patients with gout.”