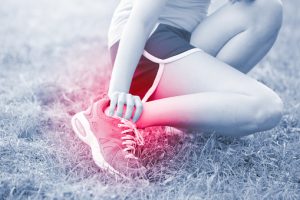 Bone bruises—or bone contusions—are a type of traumatic injury to the bone that is less severe than a fracture and can occur when blood builds up within the different layers of the bone.

Bone bruises are fairly common, so how will you know if you’re suffering from one?

Continue on to learn what symptoms accompany bone bruises, the different types of bone bruises, what causes them, potential risk factors and complications, and how they are diagnosed and treated.

Bone contusions may appear along with a bruise on the surface of the skin and be accompanied by symptoms such as stiffness, swelling in the joint, tenderness, and pain that lasts longer than that of a normal bruise. Bone bruises may last anywhere from a few days up to a few months depending on their severity.

There are three different types of bone bruises that differ based on which layer of the bone they occur in. The first is a subperiosteal hematoma, which occurs when blood gathers beneath the fibrous membrane covering the bone’s surface. The second is called an interosseous bruise and it occurs in the center layer of the bone where the bone marrow is stored, known as the medulla. The final type of bone bruise is called a subchondral lesion, which occurs when bleeding and swelling happen between the cartilage and the bone beneath.

What Causes a Bone Bruise?

Bone bruises may occur in any bone in the body, though they are most common in ones closer to the surface of the skin. They occur most frequently in the ankle, knee, wrist, heel bone, foot, and hip, and normally follow a single traumatic event such as a car accident or sports injury. Bone bruises commonly occur due to a direct blow to the bone, two bones striking each other after the injury to a ligament, damage to nearby bones, and in some cases, medical conditions such as arthritis where the bones may grind against one another.

Factors that increase your risk of suffering a bone bruise include participating in high impact contact sports, not wearing protective equipment when necessary, having a job that is physically demanding, and having osteoarthritis.

Most bone bruises will heal on their own with little or no potential complications, however, if the bruise is very large, blood flow to the area may become restricted and result in avascular necrosis of the bone, causing bone death.

To diagnose a bone bruise, your doctor will take a medical history and review your symptoms in addition to performing a physical examination to test the affected area for pain, swelling, and tenderness. They may also order an MRI to confirm the presence of a bone bruise, or do an X-ray to rule out the possibility of a fracture.

Difference between Bone Bruise and Fracture

A bone bruise and fracture can occur from the same causes, but once again, they have unique differences. Fracture pains tend to feel sharper where bone bruises tend to feel deeper and achier. Instability and deformities can occur with a fracture but not with a bone bruise. In order to be sure which injury you have, see your doctor.

How to Treat a Bone Bruise

Treatment of a bone bruise can be conducted at home and normally includes resting the injured area as well as using ice and compression. Your doctor may also recommend an anti-inflammatory to help relieve pain and bring down the swelling, and they may recommend the use of a brace to limit movement and allow the joint or bone to heal. Also, smoking can inhibit the bone healing process and should be avoided, as should heavy or intense pressure on the affected area.

If you are wondering how long it takes for a bone bruise to heal, this can vary between two to four months depending on severity. Working with your healthcare, you can work on treating your bone bruise properly to speed up recovery time. They will also advise you when you are able to begin certain activities again.

When Should You See Your Doctor

If you feel your bone bruise is severe, it is important to seek the advice of a doctor. Symptoms of a severe bone bruise include swelling that will not go down or is getting worse, pain that is increasing and is not eased by over-the-counter pain relievers, and body parts becoming numb, blue, or cold. These may be warning signs that the bone bruise is interfering with blood flow, which could result in irreversible damage to that area of the bone.

How to Make Bones Strong and Healthy

To help keep your bones healthy and strong and potentially reduce your risk of suffering a bone bruise, ensure you enjoy a balanced diet full of calcium and vitamin D and exercise regularly—preferably in ways that do not include contact sports—and avoid excessive alcohol consumption. Also, if you smoke, it is best to quit as soon as possible as smoking cigarettes can impair your bones’ ability to heal.

Bone bruises can occur due to participation in contact sports and through failure to wear protective equipment when necessary. These injuries are often minor and require rest, ice, and over the counter anti-inflammatories to heal. However, in rare cases where the bruise is very large, blood flow to the bone may become restricted and result in irreversible damage. If you are concerned that you may have a severe bone bruise, it is best to contact your doctor and receive a proper diagnosis so treatment may begin as soon as possible.