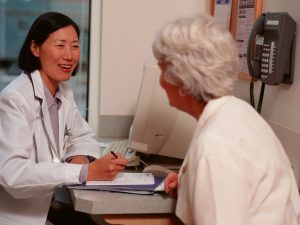 Bladder problems commonly occur in women after menopause and can include urinary tract infections, urinary incontinence, and prolapsed bladder. There are many reasons why bladder problems are more predominant after menopause, including a reduction in estrogen levels, along with the consequences of pregnancy and giving birth.

Being aware of bladder problems can make you more comfortable talking about them to your doctor. For many issues, there are viable solutions that can help you live a normal life. Unfortunately, if you do not address these conditions with your doctor, you may continue suffering in silence.

A reduction in the hormone estrogen is the primary reason why post-menopausal women have an increased susceptibility to UTIs. This is because urinary tract infections develop when unhealthy bacteria such as E. coli grow in the bladder. Normally, the healthy bacteria – lactobacilli – prevent urinary health problems by stopping the growth of these unhealthy bacteria, and estrogen encourages a robust level of lactobacilli. However, estrogen levels drop after menopause, which can also mean a drop in lactobacilli and consequently, an increased susceptibility to bacterial bladder problems such as UTIs.

Physical changes in the vaginal wall are also responsible for the increased susceptibility to UTIs experienced amongst post-menopausal women. More specifically, the reduction in estrogen post-menopause causes the lining of the vagina to get thinner, which makes it easier for unhealthy bacteria to multiply. The vaginal fluid also becomes less acidic, which is problematic because acid kills harmful bacteria and unhealthy bacteria thrive in alkaline environments. The reduction of estrogen can also prevent the bladder from emptying completely, and any bacteria that are in the urine will then remain in the bladder, increasing the likelihood of developing bacteria-induced bladder problems such as UTIs. Other factors that increase the risk of urinary tract infections in elderly women include dehydration, a weakened immune system, kidney problems, immobilization, and catheterization.

Lifestyle changes along with medical intervention can help reduce the risk of future urinary tract infections.

There are different types of urinary incontinence. Figuring out what type you have will lead you to proper treatment.

The most common cause of bladder prolapse is aging. The muscles that support the bladder become weaker over time, especially when women enter menopause. This is associated with a reduced production of estrogen, which is responsible for keeping the muscles strong.

Childbirth can also cause bladder prolapse with stress to the vaginal tissues and supporting muscles.

Signs and symptoms of a prolapsed bladder include:

To help prevent a prolapsed bladder, you should perform pelvic floor muscle exercises to stay strong. You should also avoid constipation (eat plenty of fiber!), heavy lifting, and straining as much as possible.

Keeping a healthy weight is also important because obesity puts added stress onto the pelvic muscles, further increasing the risk of a bladder prolapse.

It’s important to know when to see your doctor for a prolapsed bladder in order to prevent complications.

You should speak to your doctor about any bladder problems or changes you experience. More often than not, they can recommend effective treatments to help you better take control of your bladder problems after menopause.