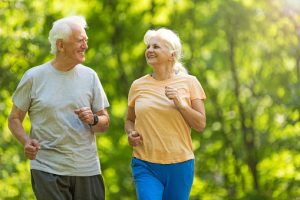 Looking to keep your bone marrow healthy and your bones strong? All you need to do is run. An Australian study has found that regular running can protect bone barrow from aging along with warding off osteoporosis.

The study revealed that long-distance runners—those who ran 50km a week—had bone marrow at least eight years younger than their non-running counterparts.

The researchers speculated that for every nine kilometers ran, bone marrow was one year younger. When aging, bone marrow converts red blood cells into yellow fatty marrow, which can negatively impact bone metabolism that contributes to diabetes and osteoporosis.

The study also found that joggers have similar results regarding their bone marrow. On the other hand, long-distance cyclers had bone marrow composition similar to that of sedentary people, even though they had similar physical fitness as the runners and joggers.


The difference may be attributed to the spinal impact that occurs in running and jogging but not cycling.
Professor Daniel Belavy explained, “If you’re riding a bike, sitting in the saddle, there is only a small amount of load going through your spine. But if you run, your spine is in a bouncing motion. [Runners] are known to have higher vertebral bone density and we showed they maintained low levels of bone marrow fat.”

This doesn’t mean you should stop cycling, though, as cycling is still beneficial to overall health. It’s especially good for a person who cannot complete exercises that cause an impact on the joints.

Belavy concluded, “[The study] is not saying cycling isn’t good for you—everyone’s body has an optimal way of training. But what we have shown here is that the relative spinal loading of running does a better job of stimulating the bone marrow.”

It is well known that weight-bearing exercises can protect the bones and protect against osteoporosis, so along with running and jogging, you should incorporate other weight-bearing exercises into your daily routine such as dancing, hiking, stair climbing, jumping rope, and tennis. Finding an exercise or sport you like will ensure you stick with it and continue to work on generating strong bones.

Stiff knee after sitting, running, and exercising: Causes and treatments

Dietary fats are an important factor in bone cell formation