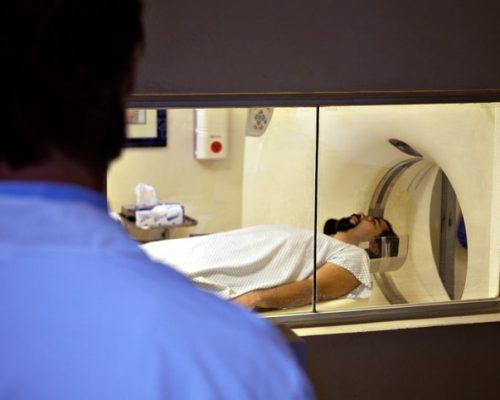 An MRI is used to obtain a detailed picture of organs and it does this by using a magnetic field and radio waves.

To conduct an MRI, a patient lays on a board, which enters a giant tube-like machine. This tube is lined with powerful magnets that pick up on the body’s protons, sending off a magnetic field.

Different tissues in the body project different magnetic fields, which can determine the effectiveness of the image obtained. Furthermore, having certain diseases can also alter images.

In order to reduce poor images, patients are instructed to stay perfectly still so to not affect the movement of protons. Doctors may also use certain chemicals to highlight images.

An MRI can be used to help diagnose several different ailments all over the body. Furthermore, MRI can also be used to monitor treatment. Lastly, it is safe for pregnant women where many other imaging tests are not.

Typically, to diagnose prostate cancer, doctors use trans-rectal ultrasound (TRUS)-guided prostate biopsy and prostate-specific antigen (PSA) testing. Unfortunately, a man can have a high PSA score, but this does not necessarily translate to prostate cancer and some men can have a false-positive TRUS biopsy.

Because both tests aren’t completely reliable, there is a need for another form of testing, and this is where MRI comes into play.

An alternative study uncovered MRI to have an 87 percent success in predicting a value for diagnosing anterior tumor foci, which is difficult to do in the TRUS-guided biopsy.

A scientific review of data from 1984 to 2000 revealed MRI to be successful in helping predict prostate cancer 50 to 92 percent of the time.

MRIs may also be useful in not only diagnosing but also staging tumors in combination with other parameters.