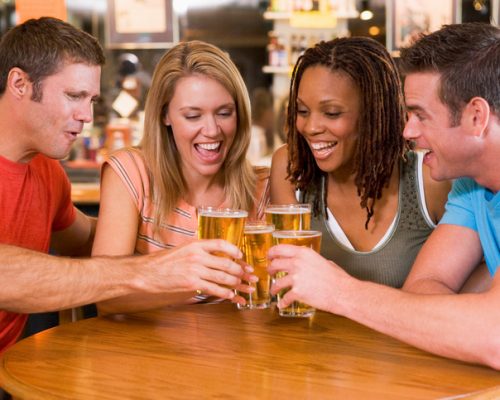 You may want to raise a glass to the good news: Beer can make you happier, friendlier, and less inhibited. The new study found that some beer drinkers even feel sexier. Lead researcher Matthias Liechti said, “We found that drinking a glass of beer helps people see happy faces faster, and enhances concern for positive emotional situations.”

The researchers studied 30 men and 30 women. Half of the participants were advised to drink beer to the point their blood alcohol level rose to 0.4 grams per liter, and the other half drank nonalcoholic beer.

Before and after the drinking, the participants performed different tasks including facial recognition and tasks testing their empathy and sexual arousal. Both groups then switched roles and repeated the tests.

The researchers found that people were more eager to become social after one or two drinks. The more they drank the more comfortable they felt looking at sexually explicit images – women more so than men.

Dr. Wim van den Brink, former head of the ECNP Scientific Program Committee, added, “This is an interesting study confirming conventional wisdom that alcohol is a social lubricant and that moderate use of alcohol makes people happier, more social, and less inhibited when it comes to sexual engagement.”

“It should also be recognized that different effects of alcohol can be seen according to whether your blood alcohol is increasing or decreasing, and of course how much alcohol you have taken,” he continued.

The findings were published in Psychopharmacology.

Cholesterol levels and the impact of alcohol